Remove the sandals from your feet, for the place on which you are standing is holy ground (Exodus 3:5)

We had time to take off our sandals – and for this and for so much more we are truly grateful!

As we reflected over the days of our pilgrimage certain aspects were voiced over and over.  The pace of the programme was greatly appreciated, gentle and considerate, allowing lots of time to be still, to be totally in the now, whether that were in the early morning walk, drenched with birdsong or in the cool of the evening immersed in the grandeur all around; in the hearing of the cuckoo at first light, or the delighting in a family of otters in the loch, or just in the abundance of Spring bursting out across the countryside in the newborn lambs and the scent of blossom. There was plenty of precious time to stop and look and notice, and to see the extraordinary in the ordinary.

This is part of the story of our pilgrimage: 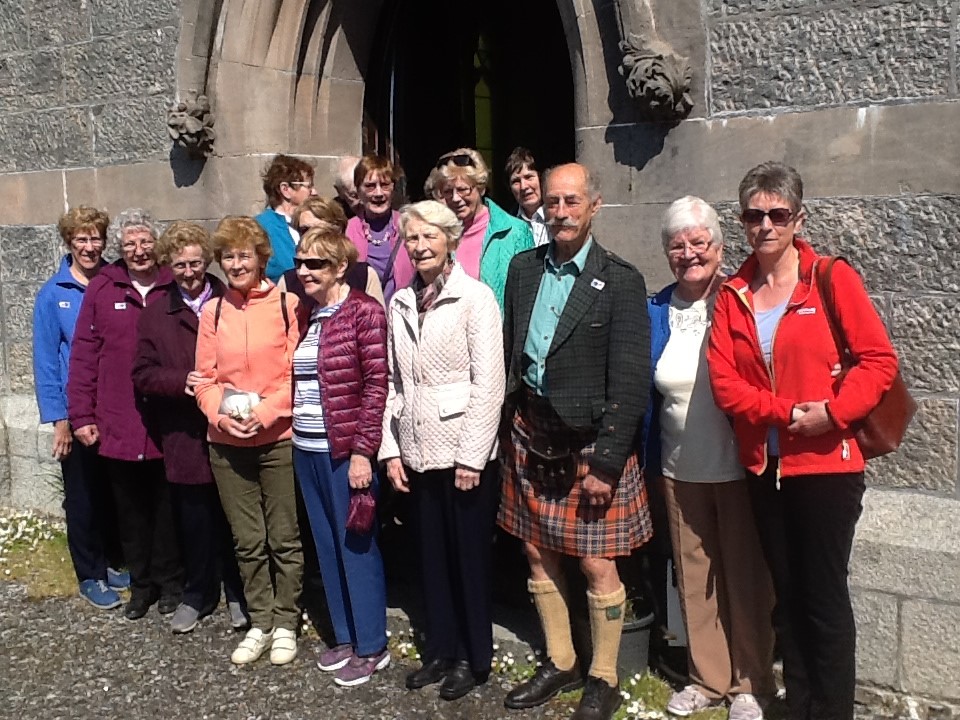 After much planning 15 Sisters from the Ireland Region caught the Aer Lingus flight to Glasgow on May 8th.  From there some travelled by train, others by bus, through magnificent scenery to Fort William where we had the great joy of being welcomed warmly by Diane and June.

Three stayed in the convent and the rest of us took the short walk to the Alexandra Hotel, a gracious, old, homely building, close to everything in the town and with stunning mountain views.  This was to be our home for the next six days.

There in the lobby as we picked up our keys, June handed us each a printout of our itinerary and a copy of Monica Barlow's, "Mary MacKillop's Scotland".  This little book, tracing Mary's travels through Scotland in Mary's own words, was the perfect accompaniment to June's guiding and was in our hands each day.

After a hot meal we were glad to call it a day.  We had arrived and all was well.

Day Two
We arose to brilliant sunshine and a warmth we had not been expecting in the Highlands.  Indeed the Highlanders themselves were not expecting it as there had been skiing on the slopes the week before!  Thus began a most blessed time.  It did mean that many of our warm woollies didn't see light until the end of the week and some had to purchase summer wear and sun hats, but we were thrilled and grateful.  The plan for this day was to stroll around Fort William with special emphasis on sites connected with Mary and her family: the new St Mary's church with its memorial to Flora MacDonald, entrusting the children of the parish to her "love  and prayer",  the site of Inverness House where Mary stayed, Ben Nevis Inn, site of Flora's birth, and the old St. Mary's Church, which Mary aptly described as, "a very pretty one (Church)".  We wandered and strolled and sat and reflected, conscious of walking the paths Mary had walked all those years ago.

An afternoon option gave us the opportunity to take the cable car to the top of Aonach Mor, again in brilliant sunshine to see the world!  The ice cream at the top was most welcome as we met and watched some bikers about to commence their dangerous descent.

The next day saw us on a mini bus in the very safe hands of our irrepressible driver, Rusty, suitably decked out in his, "Official Josephite Tour Guide" T-shirt.  Our first stop was St Margaret's Church in Roybridge where Fr. Tom Wynne captivated us completely.  Following his very warm welcome he proceeded to reveal to us the "Irish connection", hitherto unknown to many of us.  He told us that one of St Columba's monks, Chorill, came to these parts from Galway, back in the 6th Century, bringing with him a faith that would see the believers through centuries of hardship, persecution for their faith and land clearances.

Later, another Irish priest came to reside in the area and would have left, disappointed, had it not been for the evidence of that same tremendous, simple faith in people such as Sarah, the Holy Woman.  That tremendous faith was imbibed by Mary MacKillop's parents and in turn passed on to her.  What a thrill and joy it was for us to hear that our little Island contributed in some way to Mary's unshakable faith.

It was so endearing to hear Fr. Tom say that at the time of Mary's visit to these parts, everyone would have been a close relative of hers and that her father's people lived, "out the road here".

We then travelled up to Glen Roy.  What a trip!  What views from the lookout where the "parallel roads" on the cliffs face revealed the different levels of the Ice Age, reminding us that we are but pilgrims, here for such a short time in the wonderful timeless unfolding of creation.  Back down the road then we travelled to what Mary expressed as, "wild grand glen" of the MacDonald country. 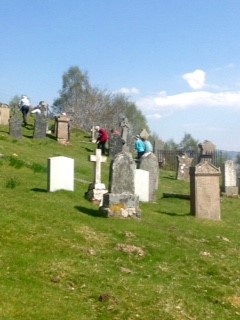 To touch the Mass Rock by the side of the road and listen to the story, moved us all; so much of the Scot's story is our story too, as various people reminded us.  We had the joy of walking down a little way of the Glen towards where the "five wonderful and most eccentric Highlanders" lived.  On then to a delicious lunch in the Roybridge Hall, organised by Diane and  served by Margaret Sargent, during which the lively conversation continued, Fr. Tom telling us that wherever St. Comunba's monks worked there is peace to this day.

We  drove on to Cille Chorill and the cemetery where many of Mary's ancestors lie.  June had prepared a ritual which we prayed in the little stone church.  Each of us carried a lighted candle, symbolic in so many ways, and also providing light in the darkness within.  We learnt of the reconstruction of this ancient church, funded by descendants of Highland emigrant families.  The words of John O' Donohue  could not have been more apt:

That presence was tangible.  We were on Holy Ground – a deeply moving experience.  Ronnie Campbell later guided us on an interesting and at times very humorous tour of the graves of Mary's ancestors and indeed his own ancestors.

Murlaggan, the home of Alexander MacKillop's grandparents, was next, where we saw the corner stone etched with IHS though the house is now used as a storage shed, and finally a view of Keppoch House where Mary stayed in 1873.

Day four saw us again on the minibus, this time headed for Glenfinnan.  En route we stopped to see the beginning of the Caledonian Canal, along which Mary travelled by steamer to Inverness.  On then to the historical church of St. Mary and St. Finnan where two very impressive Highlanders fascinated us with the history of the church, Roddy McKellaig, related to Mary MacKillop and Charlie McFarlane Barrow, a piper.  What examples of the richness and passion of oral history!

We journeyed on then to a delicious lunch in the magnificence of Glenfinnan House with its stunning loch and mountain views.

A short walk to the Glenfinnan viaduct of Harry Potter fame followed and finally the return to Fort William via Neptune's Staircase which we walked down in a very short time.  June commented  that Mary's journey on the steamer would have taken considerably longer!

Day Five was a Rest Day with optional activities.  Some chose the train journey to Mallaig, others the Crannog Cruise on Loch Linnhe and an afternoon trip up Glen Nevis but whatever the choice, the sharing at dinner time was rich and joyful as indeed it was at all times.

Our final day at Fort William was very special and in many ways brought our whole week together. beautifully.  We drove to St. John's in Caol for a special Pilgrimage Mass, concelebrated by Bishop Brian, Parish Priest Roddy and the priests from St. Margaret's Deanery.  A group of children from the local school were there as were many local parishioners.  We were enthralled, not only by the two little girls who played the harp, but also by the sweetness of the children's singing throughout the Mass.

Sr Briege Buckley rsj,
for and with the Pilgrims.