Congratulations to the Sisters who have celebrated 50 years of Religious life! 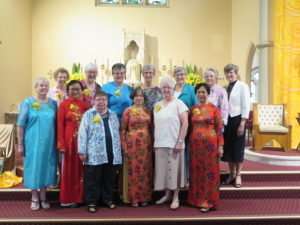 At the beginning of January 2020, thirteen Sisters of Saint Joseph from across Australia and New Zealand gathered at Mary MacKillop Place to celebrate the Golden Jubilee of their religious profession. The group of sisters came from three traditions—Sisters of St Joseph of the Sacred Heart, the former Federation Josephites of Perthville and Tasmania and the Missionary Sisters of the Blessed Virgin Mary, Queen of the World. They came together as one Congregation to renew their vows as Golden Jubilarians. This was the first time in the history of the Congregation that these three traditions, although ‘diverse in culture, nation and race’, have come together as one Congregation to celebrate fifty years of religious profession.

These Sisters’ time together was enriched by several different activities. On the first day Sr Monica Cavanagh, Congregational Leader, facilitated a conversation with them so that their diverse journeys over the last fifty years were heard and reverenced. This enabled relationships to be strengthened amongst those gathered. 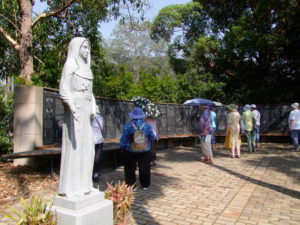 On the second day they were invited to adopt a pilgrimage stance as they boarded their transport to Gore Hill Cemetery which was the original burial place of Mary MacKillop. The pilgrims recognised that they were standing on sacred ground as they recalled the lives of some of the pioneer sisters, quietly contemplating the contribution they had made to the early history of the Congregation and reflecting on their own response in today’s world. 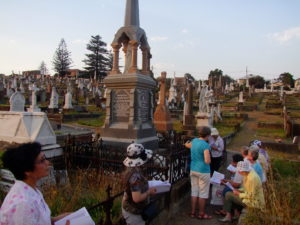 That evening they continued their pilgrimage by going to Waverley Cemetery. There they bathed in the spirit and thoughts of Fr Julian Tenison Woods as they contemplated his life as priest, Father Founder and scientist. Julian’s brother, Terence, is buried nearby. Standing at the grave of Terence, which looked down towards Julian’s grave, was a powerful moment and one which was enhanced by the vision of the sun setting over the cemetery as together they prayed and reflected.

The highlight of the jubilarians’ gathering was the Mass and renewal of vows on 6 January. Bishop Vincent Long was the Presider as family, friends and colleagues gathered from near and far for the celebration of the Eucharist. In an atmosphere of gratitude, thanksgiving and joyfulness they were challenged to be ‘critical yeast in critical times of our church.’ How appropriate then and reassuring it was to hear the challenge of the gospel of the following morning—‘bring me what you have’, which is the mandate from the Sisters’ recent General Chapter.

On their final day together the CLT gifted the Jubilarians with an enchanting Harbour Cruise which was accompanied by delicious culinary delights. The Jubilarians also took the opportunity to test out the three-week old trams in George St Sydney prior to catching the train back to North Sydney.

With gratitude these Sisters say ‘thank you’ to all who brought this time to fruition for them. They left Mary MacKillop Place feeling renewed and enriched by their time together celebrating the fact that they are now Golden Oldies in the Sisters of Saint Joseph.

You’re invited to watch parts of the Golden Jubilee Celebration Mass in the videos provided below:

Welcome and the Introductory Rites