For International Day of Families this year, our author focused on how at a time of great exclusion, the Sisters made an indigenous girl captain of the school debating team, and in their borrowed shoes, they won.

This is a memory, not a history. For over half a century I thought this story belonged to the Sisters of Saint Joseph in Brisbane. Three days ago, when I tried to Google to find more information about the school, I began to wonder if it was staffed by another order. I was only ten, or younger.

But I write fiction as well as history. Sometimes it is easier to explain the truth in a novel, when you don’t have enough facts to say, ‘it happened just like this.’ Since I was that small child, the Sisters of Saint Joseph have been my guide and inspiration. Today I realised that even if my memory is faulty, this story still belongs to the Sisters of Saint Joseph, whichever genre it might be catalogued in.

One definite memory:  Mum drinking tea in a staff room with the Sisters in brown habits, the tea in thick blue cups, strong enough to melt the spoon. Suddenly one of the Sisters glanced out the window. She raced outside to the bare playground and grabbed the two boys fighting by their collars, then held them apart. No belting, just a lecture. By the end they looked ashamed. 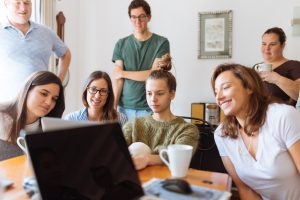 Sorry, Sister,’ they said as they shook hands.

Most Saturday afternoons our family took afternoon tea at Stuartholme, a school on the foothills where Dad taught debating. I loved the silent cloisters, the tree filled gardens, the vast floor to ceiling books where I learned the riches of history. The tea was served in thin china teacups. The quiet conversation was not interrupted by kids yelling outside.

Mum taught debating at the other school. In the other schools where Mum and Dad taught debating, the parents paid for it as an ‘extra’, like music or Art of Speech. At that school the Sisters had somehow found enough money for everyone to learn. Debating – finding the right words and best arguments to support your beliefs – might be a route to whatever life the students dreamed of, from an apprentice to university or prime minister. 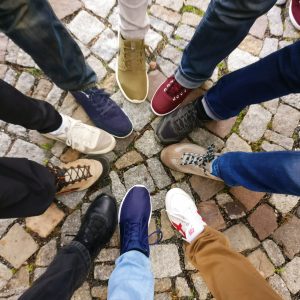 Few girls debated in early 1960’s, but it seemed no one had thought to make rules to say they weren’t allowed to. There were no rules excluding indigenous students either, just lots of excuses to kick them out. But those Sisters made an indigenous girl Captain of their school debating team. They borrowed shoes for the team too.

Mum came home laughing after that first debate. The team had been nervous, barely articulate. But something had been wrong with the other team. The ‘impossible’ team had won.

That win gave them confidence. They deserved their win in the next debate, and the next. By the end of that year, they won the championship.

I am only one of those who has tried to follow in the footsteps of those borrowed shoes.