Marian College, Christchurch, New Zealand chose their Athletics Carnival day to help the students realise the value of water in our world. 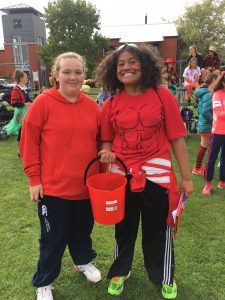 They began with a video called ‘Life without Clean Water’ by non-profit organisation Charity Water, which was shown at an assembly in the lead up to the carnival. The video highlights the difficulty of carrying water in parts of Africa.

The following points taken from the reading were also given in preparation:

During the School Athletics Carnival, there was an extra activity. Each house group: Deans, Seymour, Takahe and Brodie, had the responsibility of carrying a 10 litre bucket filled with water, for the whole day. It was not to touch the ground, so each had to think of ways to share the holding of the bucket (passing between groups during novelties etc). At the end of the day, the amount of water remaining in the bucket was measured and the House with the most remaining was recognised. 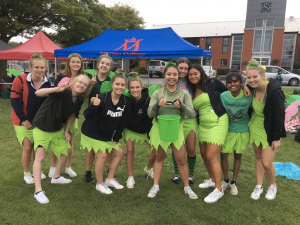 This activity was about thinking of those who do not have access to water like we do in New Zealand, and who have to travel each day to collect it.

It also takes into account the teaching in Laudato si’ – On Care for our Common Home. As people that live on this earth, it is our responsibility to care for the resources on it.

Provided below, is some student feedback…

The video shown was very powerful in showing how fortunate we are to have access to clean, fresh water. While it didn’t seem hard at first, carrying the bucket all day was tiring and I can only imagine how hard it must be for someone to do that everyday.Year 9 Student
It made me think about how much water we waste and how we shouldn’t take it for granted. Year 10 Student
Carrying the bucket of water reminded me how precious water is as a resource. It was often hard to carry because the bucket was heavy so to me it served as a gesture of solidarity towards women in third world countries who have to carry water long distances.Year 12 Student

The whole process was a great initiative resulting in valuable lessons for everyone.