On Sunday 12 August, Archbishop Denis Hart, Archbishop of Melbourne, and Sr Josephine Dubiel rsj, Leader of the Josephites’ Victoria-Tasmania Province, shared the unveiling of a statue of St Mary of the Cross MacKillop, in the gardens of St Patrick’s Cathedral, East Melbourne, just a few hundred metres from where she was born. Mary has come home! 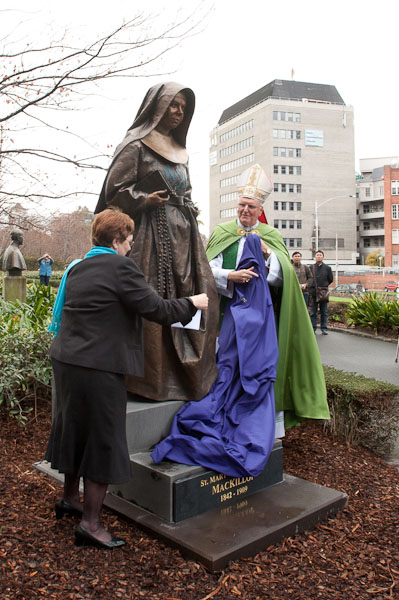 The larger-than-life bronze cast statue portrays a young and vibrant Mary. Sculptor Louis Laumen, explained: "The image depicts Mary descending a staircase, as if she had just been upstairs to put on her habit for the very first time."

In her welcome address, Sr Josephine promised those waiting to witness the unveiling of this wonderful sculpture that: ‘We will see a Sister Mary MacKillop, not on a pedestal, but stepping down, and stepping out, with a love that is real and active, and clutching a book. And we recall Mary writing, “To me, the will of God is a very dear book which I never tire of reading …’ (1873). Josephine went on to say that, ‘one of the last things Mary MacKillop was heard to have said was, “Go on…”, and whilst this message could have various interpretations, today we take to heart Mary’s inspiration and challenge to each of us to step out and “go on” …go on and bring good news to the poor, liberty to the captives, sight to the blind, wherever we are called to be today – in Mary MacKillop’s hometown, or beyond.’

After his blessing of the statue, Archbishop Hart commented that: ‘St Mary of the Cross MacKillop is a very distinguished Australian,’ and ‘ her birthplace here, not far from this Cathedral, is a reminder of how her life has been intertwined with the expansion of Australia and the engagement of faith in its people.’ The Archbishop sees Mary as ‘a special patron … a special friend of St Patrick’s’ who, on her visits to Melbourne in the late 1900’s, frequently prayed in the Cathedral. He reminded all present that Mary calls us to, ‘never see a need without doing something about it’. He sees this statue of Mary as ‘a reminder to us to step out and follow Christ by serving those around us with love.’ 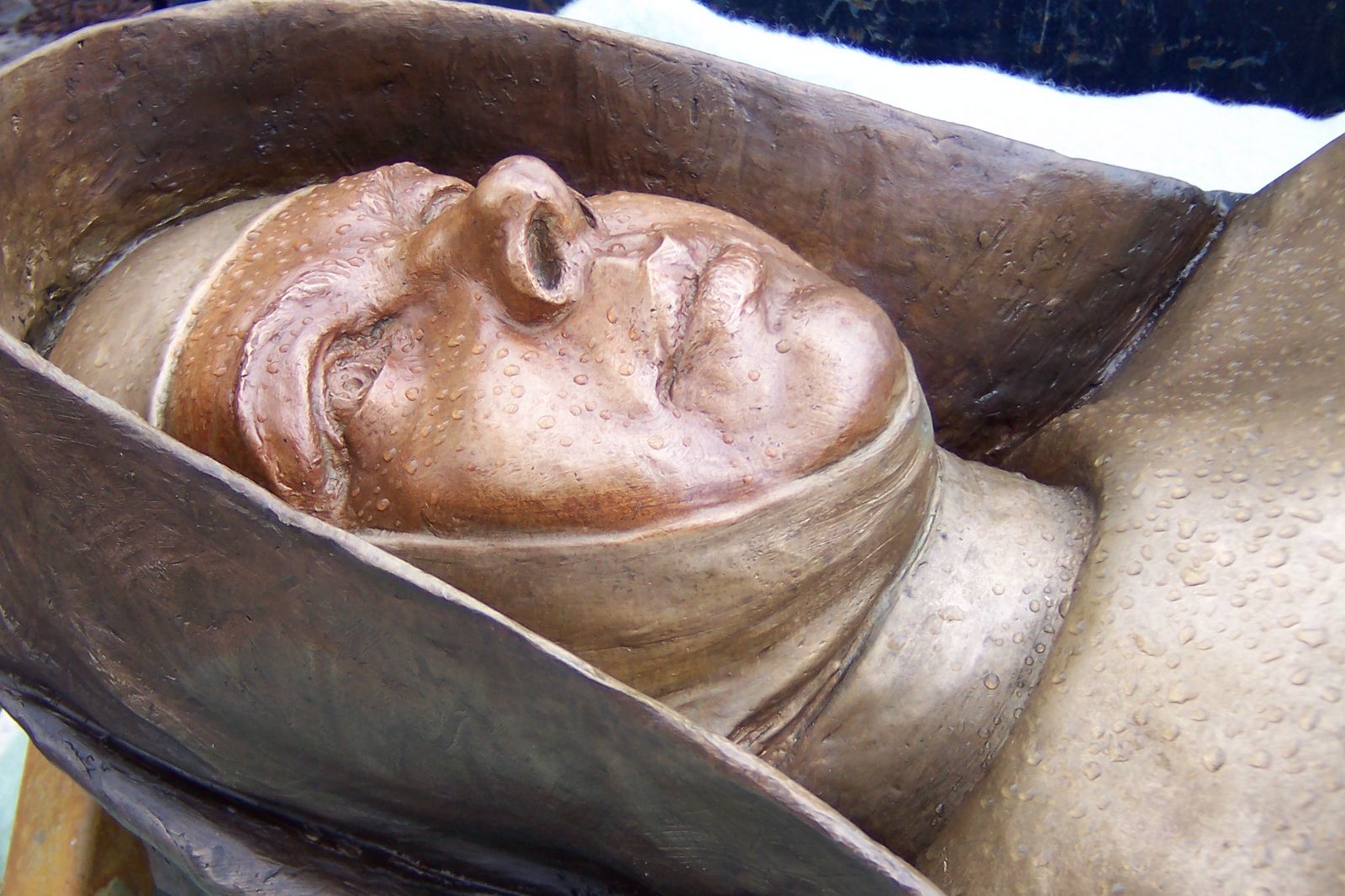 Two days prior to the unveiling, the staff of the nearby Mary MacKillop Heritage Centre received the ‘inside word’ that the statue had arrived from the foundry, and would shortly be installed in its prominent place within the Cathedral precinct. Mr Garry McLean, the Centre’s CEO and Province Archivist, Sr Betty O’Donnell rsj, grasped this gift opportunity to witness this historic moment. Betty has described her experience: ‘A trailer was in the grounds with the statue of Mary – lying in readiness to be placed on the steps, which had been prepared about a week earlier. I was delighted to be able photograph close-up Mary’s serene face, and capture each stage of the installation work. This included the crane being attached to the head of the statue, which was then hauled up from the trailer, and suspended momentarily in the air. A trial placement ascertained that the positioning of the “bolts” into the holes was perfect. The crane operator was heard saying “your prayers are answered!.” Prior to the final placement, glue was poured into the holes along the steps, and, with precision and gentleness the statue was slowly placed into the position prepared for it. Mary was finally secured’

Mary  is home, she is there to stay! Betty has shared her delight in in witnessing this moment in history: ‘How pleased I was to be instrumental in capturing this historical occasion! The statue of our St. Mary of the Cross MacKillop will remain in the beautiful garden setting of the Cathedral grounds “until the end of time.” ’ And Betty’s prayerful hope? ‘May this statue of Australia’s St Mary of the Cross be an inspiration to all who see it to contribute to a kinder world, which will bring hope to the poor, shelter for the homeless, food for the hungry, of which so much is needed in our world.’

This is a large photo gallery – 22 images – keep clicking on the right arrow.  Enjoy!