The article below is adapted from a speech given by Sr Mary Ryan on Saint Mary MacKillop’s Feast Day at St Francis Xavier’s Cathedral, Adelaide on 8 August, 2018.

In March 1891, just 25 years after the Josephites’ very humble beginnings in Penola, Mary MacKillop wrote a letter to the Sisters in which she said:

Little did either of us dream then of what was to spring from so small a beginning… God has done wonders for us… Mary MacKillop (to the sisters) 25.3.1891 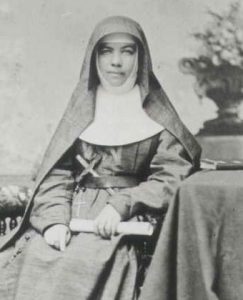 On that day in 1891, little could Mary have dreamt that:

In 1891, how could Mary have ever imagined that:

What is it about Mary MacKillop that inspires so many people?

Why do so many people pray to and with her?

Why are so many gathered in so many places today to celebrate her feast-day and honour her memory?

While so much has been written and said about Mary, I believe that the words of two Popes and our own State Governor of South Australia give us strong clues about why she touches the hearts of so many people – regardless of their age, gender, culture or religious background.

Mary MacKillop embodied all that is best in your nation and in its people. Pope John Paul II

He urged us to:

…learn from her (Mary) to be a gift of love and compassion for one another, for all Australians – and for the world. Pope John Paul II

Mary MacKillop is one of the most outstanding figures in Australia’s history.
I know that her perseverance in the face of adversity, her plea for justice on behalf of those unfairly treated and her practical example of  holiness have become a source of inspiration for all Australians.
Generations have reason to be grateful to her. Pope Benedict XVI

Our Governor, Hieu Van Le, also admires Mary. He loves her resilience, and sees her as: ‘a woman for all Australians’ who is a relevant role-model for us ALL today.

The Sisters of Saint Joseph and many other people, believe that Mary’s is a story that must be told.  And where better to do this?

Here in Adelaide, we have a very sacred site: the land on Portrush Road, Kensington, where Mary lived for eleven years until 1883.  Here we welcome people to:

The redeveloped Mary MacKillop Museum Adelaide will be a contemporary interactive, inspirational, place that will engage visitors of all ages, cultures and beliefs, inspiring them to reach out in a spirit of care and compassion.  Like any worthwhile project, considerable funding is needed. A fundraising campaign has been established. Like Mary MacKillop and her early Josephites, we’re ‘begging’! We are seeking financial support from those who understand the importance of promoting Mary’s legacy – because they recognise the significance of her story, and the impact it still can have  on the lives of countless people – here and abroad.

You are each invited to be part of this vision.  If you wish to donate, you can do so online using the link below, or by contacting the Josephite Regional Office, 4 High Street, Kensington, 5068: email or phone: 08 8130 5900.

Your generosity will be so appreciated!  Every little bit helps!