A Ritual for those Facing the Future after Bushfire Devastation.

On two occasions I have very nearly had a property burnt by bushfires – the last time fire went right to the back wall of the house and it was only saved by the firefighters.  I remember trying to decide what to take in my car as I was ordered to evacuate.

What was it that I held most precious in that house? 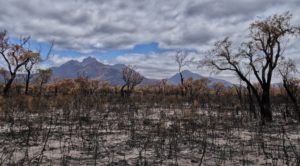 After the second fire, I walked down into what had been my garden and saw the stark tree trunks, some of them surprisingly ocre red among the black and the bare earth and uncovered rock faces sprinkled with ash.

I knew the Australian bushland is to some extent regenerated by fire – that we are intruders in an ancient pattern of death and renewal which was deeply understood by the original custodians of our land.  But that was of small comfort at the time, although I did marvel at the eucalyptus springing forth with new leaves within days of being burnt, one would have thought, to extinction.

What I remember most is the bush suddenly becoming my enemy rather than my friend – its closeness a threat rather than a gift to my life.  That faded as time went on, but I now look at it with different eyes.

This ritual is for those who live in the bushland after the fires.  It is not intended to do full justice to a situation in which people have died, although it could be adapted for that.  It also does not strongly recognise the wonderful efforts of firefighters and others who serve people during the fires, although it does touch on that.

The function of this ritual is more an acknowledgment that there is complex and widespread grieving going on.

You are invited to read a Ritual written by Dorothy for Bushfire Victims here: