Sr Audrey notes: ‘People are still phoning and wanting to join the pilgrimage from Scotland so we are well over the 140 mark preparing for the big event. 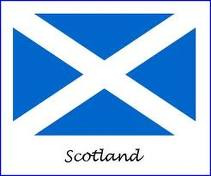 We don’t have any complimentary cabin bags and caps though! However, our Scottish group should stand out in the crowd as we have prepared for each a tartan lapel with medal of Mary MacKillop attached and a Saltaire (Scottish flag) so look for the blue flag with the white cross. We will have too, the commemorative scarf which all the Australians and New Zealanders will have from their Harvest Travel packs. ‘

The lead up to the departure is very busy. In the past couple of weeks visitors have arrived from Australia and New Zealand en route to Rome as well as people from England who are booked with the Scottish pilgrimage group – all are anxious to visit the places significant to Mary’s story.

On 7 October Sr Audrey will go to Glasgow to meet a group of 39 Aussie pilgrims, mainly from the Melbourne Archdiocese, who, under the leadership of Fr Greg Bennett, will spend seven days doing the “Scottish Heartland” pilgrimage. Audrey will act as tour guide and commentator as the journey takes them from Glasgow to Oban, then 3 nights in Fort William while they visit significant sites in Lochaber and Fort Augustus. Sr Therese will join the group once they arrive in Fort William and will share the role of commentator from then until they leave from the Edinburgh airport for their flight to Rome on 14 October. This happens to be the same day that the Scottish group leaves so having farewelled the Aussies the Sisters will make their way by train to Glasgow and Prestwick airport where they will meet up with the Scottish contingent for the flight to Rome later in the afternoon.

A highlight of the visit by the Australian pilgrims will be the celebration of Mass in the historic 15th century chapel at Cille Choirill cemetery. The celebrant will be Bishop Joe Toal – a local ‘Roy Bridge boy’ and relative of Mary MacKillop. Lochaber pilgrims going to Rome will join with the Aussies at this Mass so that afterwards, over a cuppa, they will have an opportunity to meet some of Mary’s relatives living in the area.
Sr Audrey noted that: ‘The media continues to take a keen interest in Mary’s canonisation. We were recently interviewed by ITV for a piece to go to air at the time of the canonisation. On 10 October an AAP Australian journalist based in London is coming up here to attend the Mass at Cille Choirill. She will stay with us after that to get further material for an article to send home to the Australian press. These are all great opportunities to help make Mary known in the land of her ancestors.

Final words from both Audrey and Therese: ‘We are so looking forward to meeting up with our Josephite Sisters in Rome along with all the Aussie and Kiwi pilgrims. What a great time it will be.