Feast of St Joseph the Worker – 1 May 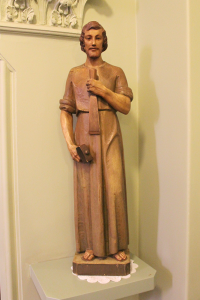 An encounter is an unexpected meeting. Thus there is always a surprise element in an encounter. Sometimes hearing the same story over and over we can miss the element of surprise and take for granted that there is nothing new in what we are hearing.

When we listen to the Scripture passages referring to St Joseph does this happen?

St Joseph as portrayed in Scripture is many things. He is, firstly, a real human figure, but as Pope Francis says in Patris Corde, one who hidden in the shadows still plays a significant part in salvation history. And it is in the shadows, that liminal place, that we can best encounter Joseph. What was that place like for him? What questions was he forced to answer as danger lurked around himself and his family? How did Joseph respond to his dreaming and intuition? What was it like for him to go in darkness towards an uncertain future? How can our encounter with Joseph help us as we stand in the chaos of our own time?

Joseph carries forward the Jewish/Christian story. He is an important part of the prophetic and mythical story linking the First and Second Testaments. Remember, as Richard Rohr writes, myth refers to what is always true. (Rohr, The Universal Christ, ch 14) Joseph is there to remind us of the forgiving and compassionate God whose love permeates Jewish history.

Joseph is written into the Scripture also to link Jesus to his ancestral past and to verify that Jesus is of the House of David. This Joseph is also prophetic. Joseph takes us back to that archetype of the one who saves. He invites us to remember that other Joseph, who saved Egypt and his Jewish family. By retracing the path of the prophets, this Joseph validates what the prophets of old have proclaimed. This is the great myth: God’s saving power is amongst us and within us.

In Joseph’s day, possibly about 5BC, there was little justice to be had for anyone who defied the power of the Roman Empire and its representatives. Joseph had to carry justice within himself as he moved from one country to another and back again according to the Scriptures. His acts of justice were done to preserve human life on one level, but his part in the great story of Incarnation also enabled the fulfillment of the Messianic prophecy. Joseph’s acts of justice flowed from deep archetypal roots. The effect of his acts flowed through history not for himself, but for those whom he loved and for future generations who would see God’s power wielded through him.

The poem by Gerard Manley Hopkins describes Joseph, the graced and just man:

I say móre: the just man justices;
Keeps grace: thát keeps all his goings graces;
Acts in God’s eye what in God’s eye he is —
Chríst — for Christ plays in ten thousand places,
Lovely in limbs, and lovely in eyes not his . . .Gerard Manley Hopkins, As Kingfishers Catch Fire

On the feast of Joseph the Worker, we encounter this man of justice whose life journey fulfilled a prophecy, saved lives and, while staying in the shadows, carried light. His story, one of silence and courage, inspires us to do the same.