Greetings on the feast of Saint Mary MacKillop.

As we celebrate Mary MacKillop’s feast day, let us celebrate how she was a woman who raised the powers of love in her time and continues to inspire us to do the same in our day.  Love was at the heart of all that Mary did. She recognised that the source of her love had its origin in God. She knew deeply within her that:

God is love and those who abide in love abide in God, and God abides in them.
1 John 4:16 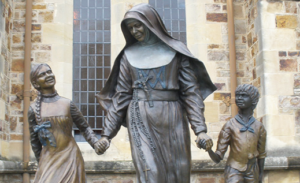 From this spiritual source she drew the energy to be a heartbeat of God’s love in the world especially for those most disadvantaged in our society.

Mary loved all with an undivided heart. As Pope John Paul II said during his 1995 visit to Australia for her beatification:

Mother Mary’s life speaks eloquently because it was firmly anchored in something for which every human heart longs: inner peace, that peace that comes from knowing that one is loved by God and from the desire to respond to God’s love. [1]Pope John Paul II – 20.1.1995

Hers was a spirituality of the heart, holding in balance a contemplative stance with a concern for justice. Mary entered the mystery of God’s love and allowed herself to be transformed by it in order to assist the voiceless to find their voice. Mary was indeed a woman who remained grounded in the reality of life, and through all her experiences learnt to ‘act justly, love tenderly and to walk humbly with God’ (Micah 6:8). She rolled up her sleeves, got her hands dirty and responded to the cries of those who struggled in life.

An example of how Mary MacKillop raised the power of love occurred when Mary and Sister Helena McCarthy were on their way to the city. Sister Helena shared this story. “We were waiting at the corner of the Street near Mount Street Post Office for a tram. A young woman came staggering along and at last reached and rested by the stone wall on the side of the footpath. I naturally thought the woman was intoxicated, but Mother’s quick eye detected something more serious. She said to me ‘Come along, dear and see what is wrong with this poor woman.’  On getting up to her we found the woman was very ill.  Mother asked if she could do anything for her. The woman said if she could get to the chemist’s nearby, she knew what would relieve her. The three of us then went to the chemist’s where the patient was attended to and we waited until she felt better”. [2]

On this feast day let us, like Mary MacKillop, be women and men who raise the powers of love. Recently I was having a cup of coffee with one of our sisters and I asked her what she had been doing. She replied that she had just come from a meeting of ‘Grandmothers Against Detention of Refugee Children’. Their work is based around the safety and protection for innocent children living in the experience of detention centres. On another day, I visited the office of the Sisters of Saint Joseph Congregational Administration Centre to find the staff knitting over lunch. They told me that they were joining others around our country who belong to the organisation ‘Wrap with Love’. Joining in movements such as these is one way of continuing to give expression to Mary MacKillop’s vision for living the Gospel.

On this feast day may you be inspired like Saint Mary MacKillop to make a difference in someone’s life by raising the powers of love through an act of everyday kindness.

May your day be filled with the joy and love that filled the heart of Saint Mary MacKillop.