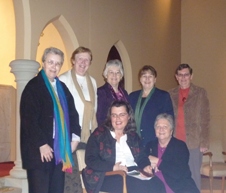 Tarina Brook has engaged in discernment regarding Josephtie Life for some years now.  Tarina came to Quakers Hill from the Queensland Province and it is to her own home in Queensland that Tarina will return this week as she prepares to make private vows.

On Wednesday June 23 Tarina joined members of the CLT, her Discernment Guide, Kateri Duke and fellow treveller Gail Lambert around Mary’s tomb to give thanks for the journey so far.

Tarina will make her priva

As Tarina prepares for this significant step, let us remember her in prayer.

What are Vowed Affiliates?

The Sisters of Saint Joseph are vowed members of the Congregation. Today some people are seeking a closer relationship with the sisters to collaborate in God’s mission. These people have taken private vows and are affiliated to the congregation. These vows of evangelical chastity, poverty and obedience are taken according to an agreed Rule of Life with a Memorandum of Affiliation between the person and the Congregation. This affiliation is open to individual men and women who live independently of the congregation but are closely affiliated.