Temuka’s foundation can be traced to a meeting in 1873, at Villa Maria in Sydney, of Father Julian Tenison Woods with a Marist priest, Father Fauvel S.M. 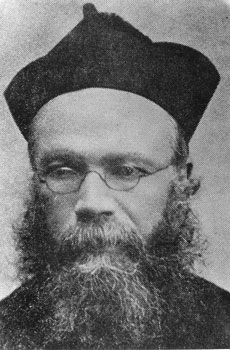 When he became parish priest of Temuka in 1876, he remembered the conversation about the Sisters of St. Joseph and decided that this modern institute would be suitable for his new mission. He also had great devotion to St Joseph and dedicated his parish to this great saint. Permission was gained from Doctor Redmond, the Bishop of Wellington and the South Island, and the invitation was extended to the Sisters.

Father Fauvel (pictured right) began an exchange of letters between Temuka and Adelaide, requesting Sisters to open a school. He even sent Mary MacKillop a small picture of St Joseph asking her not to send it back without Sisters. He wrote:

“I believe the Sisters of St. Joseph are destined by God, with the help of their beloved father, to do a great deal of good in this part of New Zealand.”

He spoke, too, of many Catholic homes of five or six girls, some of whom would wish to give themselves to God in the work of the Sisters. This assurance was fulfilled in that no fewer than eighty three vocations to the Congregation came from Temuka and the parishes of South Canterbury.

Although Mary MacKillop was finally able to grant Father Fauvel’s desire, intending to bring the first Josephites to New Zealand herself, circumstances prevented this and she did not visit Temuka until 1892.

On the 11th April 1883 Father Fauvel wrote to express his delight at the news that the Sisters were at last coming:

“After long months of absence, my little St. Joseph will come back accompanied by some of his daughters for whom I have sent him to Adelaide.”

Three Sisters, Calasanctius Howley, Raymond Smyth and Immaculata Punyer left Melbourne on the 24th October 1883 bound for New Zealand. The story of their expedition to this country is told in their letters to Mary MacKillop. Sister Calasanctius wrote:

“We left there on the feast of St Raphael, so we had a good guide to conduct us to New Zealand. We had a short stay in Hobart and took tea in the convent of the Sisters of Charity where we got as warm a welcome as could be given in any of our convents. We came in the ‘Hauroto’ as far as Port Chalmers and then transhipped to the ‘Wakatipu’ which took us to Lyttleton. We just had time to get our luggage passed and then on to Temuka by the 12.45pm train.”

Sister Raymond, who was very sea sick from Port Chalmers to Lyttleton, wrote:

“At Port Chalmers Sisters Calasanctius and Immaculata went on shore and found their way to the presbytery where the priest, Father Newport, gave them a great welcome and took them back to the steamer.”

“We arrived in Temuka about a quarter past seven. I really cannot describe the rest. I felt like a poor man who was made Lord Mayor of Dublin.”

The platform was crowded and they were given a warm welcome by Father Fauvel and all present. However, they were soon reminded that they expected five Sisters. Indeed, Sister Immaculata wrote that Father asked her to write to Mary McKillop to send another Sister. She believed he would send St. Joseph back if no Sister was sent.

They were taken to the church where the bells were chiming and the harmonium playing. There were prayers in thanks for their safe arrival and they then went to the presbytery for dinner before going to the convent, which had been the presbytery, in the days when the priests came from Timaru to minister to the people of Temuka and the surrounding district. 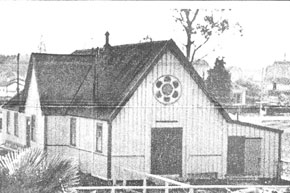 The school was the original church which had been replaced by a new one and opened on the Feast of St Joseph. The new arrivals set up the old church as a school which was formally opened on the 12th November, 1883. Before the Sisters arrived ninety pupils had been enrolled. Among them was Amy Elkis who later became the Superior General of the Congregation.

The early letters of the three Sisters gave details of the beauty of the country and an indication of the difficulties they underwent in the new foundation. The education system was different, involving regular visits by state inspectors, the pressure of examinations, a shortage of books and equipment and the climate was cold.

Despite delays in more Sisters arriving, these pioneer Sisters continued to establish and improve the school and settled into their ministry in a new country. Thus began the first of many foundations in New Zealand.