New Zealanders expressed both grief and unity at the time of the Christchurch tragedy; they showed the world that humanity can rise after terrible events

They honoured the dead, fostered unity and demonstrated the truth of the inclusive ‘us’. Their Prime Minister, Jacinda Ardern, embraced the whole of the nation’s heritage and culture: of those that have come in recent times and of the ancient culture of the Māori people.

We, in Australia, watched New Zealanders drawn intuitively, and possibly at an unconscious level, to the ancient centre of themselves. As the people of Christchurch expressed the intangible ‘us’, the power of the Haka reverberated around the world. Though Australians may not understand the gesture well, many are drawn to envy New Zealand’s link with ancient culture. In the overwhelming grief and pain of the tragedy, we see the Haka expressing pride, strength and unity.

Australia’s ‘new settlers’, those who have arrived in the past 240 years from the European Union (EU), Asia, the Middle East, the Americas, Africa and the Pacific, are gradually discovering the 60,000 years of culture in this country.

Systematic research has, for some years, charted Australian attitudes to the First Nations of this land. Results are published as ‘The Reconciliation Barometer’. The most recent posting indicates that 90% of Australians now believe that our relationship with Aboriginal and Torres Strait Islander people is important, and 79% agree that Aboriginal and Torres Strait Islander cultures are relevant to Australia’s national identity. The Reconciliation Barometer is read every two years and the recognition of Australia’s Indigenous culture continues to rise. Gradually, though belatedly, many Australians are acknowledging it.

Josephite Sister Kenise Neil wrote, “[Father] Julian Tenison Woods’ description of his downward descent into the Naracoorte Caves could be a metaphor for our life journey into our indigenous selves”:

…the entrance …a hole, on top of the hill …(leading) to a small sloping path under a shelf of rock. …one gets a glimpse of the magnificence enshrined below …the eye is bewildered by a profusion of ornaments and decorations of nature’s own devising. It is like an immense Gothic Cathedral.Fr Julian Tenison Woods

Christians in Australia are searching for spirituality embedded in our country. Pope John Paul II addressed a gathering of First Peoples in Alice Springs many years ago:

The Church in Australia will not be fully the Church Jesus wants her to be until you have made your contribution to her life and until that contribution has been joyfully received. Pope John Paul II 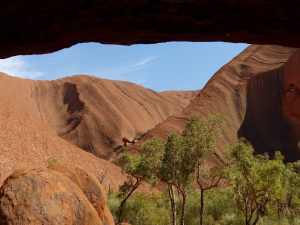 In May 2017 representatives from all Aboriginal Nations across Australia and the Torres Strait Islands met in Uluru and issued, with the overwhelming support of this historic gathering, a powerful ‘Statement from the Heart’. They invited all Australians to claim the heritage of the land. Given that Australia was settled without Treaty, there are two sentences that I find most poignant. ‘When we have power over our destiny our children will flourish. They will walk in two worlds and their culture will be a gift to their country’. The entire Statement was summarily dismissed by political leaders of the time, but will eventually be seen as a defining moment in the history of Australia.

I recall the words of the poet David Whyte:

To remember the other world in this world is to live in your true inheritance. David Whyte