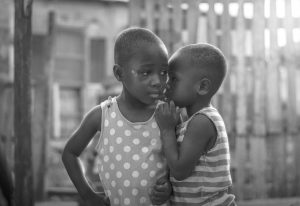 I watched an Al Jazeera documentary recently called The Cut about female genital mutilation (FGM) in northern Africa. At first, I felt I was watching something horrific but which was far from home and disconnected from my work on climate action in New Zealand. But then the narrator pointed out that when crops fail, as they do more and more with climate warming, there is an incentive for fathers to marry their daughters away. Suddenly, our failed vegetable plot in our flooded back garden in South Dunedin connected me to my sisters overseas. I am lucky that a failed garden has no bearing on my future. But in Somalia, daughters are often seen as commodities and at the age of 14-15 are married to older men in exchange for livestock. When crops fail this can happen to even younger girls. And those who have gone through FGM are “worth” substantially more livestock.

It’s true that climate change affects us all, however, women and girls are impacted on two different axes. First, they experience the harm of climate change as human beings. Second, they’re impacted by male violence, commodification and exploitation. With climate change this manifests (excuse the pun) in many different ways, from early marriage to increased domestic violence during heat waves.

Early marriage reduces the girls’ time in school. Family pressures around food and health resources can result in women and girls being sex trafficked. Regional militarism and war result in specific abuse of females — rape, forced pregnancy and living situations without maternity care.

We know that learning to read improves girls’ lives most significantly. When women and girls have that tiny bit of power, they choose to have fewer children. And as pregnancy complications are the leading cause of death globally for girls aged 15-19, according to the World Health Organisation 2017, this choice is life-saving.

I believe prioritising the well-being of women and girls worldwide is crucial in stopping catastrophic climate change. If we treat women and girls with kindness and compassion, we will treat Earth in the same way. I believe Lierre Keith, writer, feminist and environmentalist, that the basic rights of girls are crucial to the survival of the planet. It’s fair to say: something other than the climate needs to change.

What can we do? Get involved now! In small things like fundraising for charities such as Caritas which support girls’ education, or for Richie Hardcore’s programme helping men reform themselves from violence. Speak to others about the connections between our lives in New Zealand and climate impacts worldwide so people learn that climate change is a human problem, not merely the climatologists’ challenge. And in harder but essential things such as making substantial changes in our attitudes and lifestyle for the good of Earth…

Photo by Nathaniel Tetteh on Unsplash.