His name will be held in affectionate remembrance [i].

His work was nearly over now. Partial paralysis of the hands and legs had been slowly creeping onward . . . The remarkable fortitude with which he bore his sufferings, and the resignation with which he accepted his lot  – so different to what he had wished and hoped for – edified those who were privileged to witness them . . .  he had to endure nearly three years of slow torture, with no hope of sufficient recovery to complete his unfinished work, or to arrange the abundant material gathered with unsparing labour and energy during his travels – sufficient for several volumes . . .

Every week, Father Woods was visited by Father Ambrosoli, Chaplain of St Vincent’s Hospital… Other priests gave many a friendly call, the Sisters visited him, but by degrees the sufferer was unable to see anyone except his immediate attendants . . . [ii] 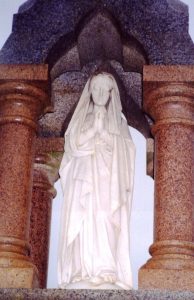 On the 6th of September, the doctor pronounced the case hopeless . . . He still lingered a short time, feeling sure that, as he had written long ago ‘The evening draweth nigh, and should not our faces shine as they are turned towards the sunset.’ On Rosary Sunday, 6th of October, he received the Last Sacraments. Early next morning, the long looked for end had come, Father Marcellus being with him at the last . . .

On Wednesday, 9th of October, a solemn dirge and requiem were sung in the Cathedral.  There was a large attendance of the clergy; and the laity included. . .  [a long list of names followed] . . . The Cardinal Archbishop presided in the sanctuary . . . The Sisters of St Joseph paid a graceful tribute to the Founder of their Order by assembling to the number of over thirty at the obsequies in St Mary’s. 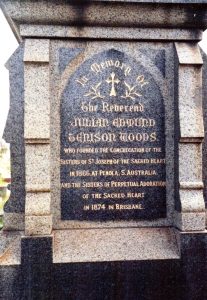 Yes, about thirty – all who could possibly attend. But in many a little convent that day, the Sisters of St Joseph, scattered across Australia, united with their Sydney Sisters in supplication for their Father Founder, though feeling that one who had suffered so long and so patiently scarcely needed prayers.

After some time, his fellow scientists and admirers had a beautiful monument erected over his remains. It is a block of granite, grey and sparkling, such as the geologist had often admired. On one side of the polished panels is the following inscription –

Of your charity Pray for the soul of the Reverend J.E. Tenison Woods Died 7th October, 1889.  Aged 57 years. Eternal rest give unto him, and let perpetual light shine Upon him. In te Domine speravi, non  confundar in Aeternum.

On each corner of the block is a pillar; these support curves which join in a cross, looking something like the Benediction throne over a tabernacle. In the space between the pillars is a white marble statue of the Mater Dolorosa, about three feet high. 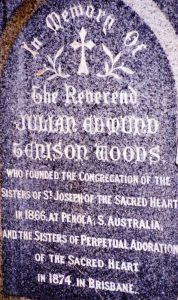 The monument rises from a marble floor, surrounded by iron railings. Standing on this floor, in front of the monument, is a stone missal (open on its stand), bearing the words – ‘Thy will be done.’

How appropriate is the last resting place of the gentle learned priest and naturalist! Crowned with the cross, beneath the statue of the ‘Sweet Mother’ whom he had so tenderly loved – a little child in the next grave, ‘Australia’s gifted son’ Deniehy [iii] at his feet, the ‘Silver-tongued’ Dalley [iv] close by – typifying all that during life had most delighted him – Devotion, Innocence, and Intellect!

There, on the hillside, overlooking the Pacific which washes far below the rocky cemetery, and murmurs a perpetual requiem in its own soul-stirring music, the mortal remains of Father J .E. Tenison Woods await the resurrection.