In Search of a Miracle. 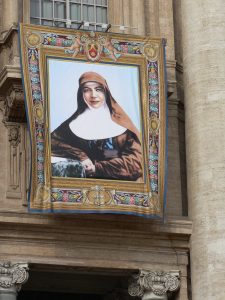 A significant requirement for a canonisation is the attribution of a miracle to the intercession of the person to be canonised. Saint Mary of the Cross was beatified by Pope John Paul II at Randwick Racecourse on 19 January, 1995. She was, by that proclamation, a saint for Australia. The next step was to seek her canonisation, a step that would recognise her as a saint for the universal church. This process required proof of her intercession by the recognition of another miracle which was needed to take place after the beatification.

In 2001 I was appointed vice-postulator to Fr Paul Gardiner sj who was the Postulator since 1984. One of the tasks was to find a cure that would meet the stringent requirements to be considered for study as a miracle. Sr Claire Burgess and her assistants worked assiduously responding to requests for prayer for those in need. Claire had mountains of papers outlining remarkable cures but, for one reason or another, none met all the documentary requirements until one crossed her desk in 2005 relating to an extraordinary cure of Mrs Kathleen Evans. I visited Kath and her husband, Barry, at their home on 17 October, 2005. Barry as well as Kath’s doctors had kept copies of her medical records and were willing to share them. They were invaluable to the study for the miracle.

After my visit to Kath and Barry I wondered why I had not seen this case before. I was in bed and had a lightbulb moment – I realised that the cure had occurred after the Decree of Beatification was promulgated but before the ceremony was held. I got out of bed and called an official, Monsignor Robert Sarno, whom we had met some years previously as students from Ottawa visiting the Causes of Saints Dicastery. He informed me that the Bishop of Maitland – Newcastle was the person to write to the Prefect of the Causes of Saints asking for a dispensation of time. I drafted the letter which was duly sent by the Bishop early November and we looked forward to a good Christmas gift – the granting of the requested dispensation. It had not arrived by November 2007.

Mary MacKillop was a great believer in the Providence of God and Providence played a big part in the journey to canonisation. On 7 November, 2007 I was asked to attend lunch at Mary MacKillop Place with a group of overseas reporters preparing for World Youth Day 2008. One of the reporters asked how the Cause was progressing. I told him in rather strong terms of our disappointment with the non-reply from Rome to the request. When I finished, he informed me he was a close friend of the Prefect and he would visit him on his return. I was a bit mortified to say the least but thrilled (as were all who were waiting) to receive news of the requested dispensation in January 2008.

Thus, began the final two-year journey, a journey that had begun in 1925 when the Cause of Mary’s canonisation opened. Kathleen’s cure was declared a miracle through the intercession of Mary on 19 December, 2009. Mary of the Cross MacKillop was canonised in Rome, the first canonised saint for Australia and a saint for the universal Church, on 17 October, 2010 exactly five years to the day from my first meeting with Kathleen Evans.  Kathleen (with Barry at her side) engaged in a wonderful ministry of making Mary MacKillop known and enjoyed good health for 23 more years – a wonderful miracle indeed.