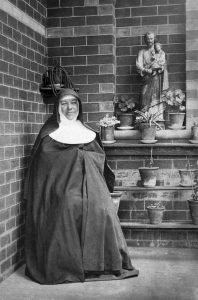 In 1902, at the age of 60, Mary MacKillop suffered a stroke. Her mind was unaffected and her speech intelligible, but, with her right side paralysed, she had to make major adaptations to her life. She now walked with a stick and, towards the end of her life, was eventually confined to a wheelchair. She dictated letters, but also learnt to write with her left hand and took up typing – the typewriter being at the time quite a new invention. She continued to govern the Congregation of the Sisters of St Joseph as Mother General and, over the next seven years, visited Sisters all over the country, opening up new works and responding to needs wherever she found them.

Certainly, we notice deterioration in significant aspects of Mary’s life as a result of the stroke. But we also notice enrichment. Having to depend more on others, she seems to speak and write words of encouragement more often. Her letters repeat what is at the core of faith and spirituality. She was in constant pain – she described it as being like a giant toothache all through her body – but she found deeper meaning in suffering as displaying in her own body the cross of Christ for our time (cf. Colossians 1: 24).

In this, the tenth year after Mary’s canonisation in Rome on 17 October 2010, many people around the world have experienced the COVID-19 virus as a kind of communal stroke. We have been paralysed in some ways and have had to adapt to deprivations of all kinds. It is an unfamiliar world in which we carve out our future. There is a background fear in society. We are challenged to find new approaches to life. 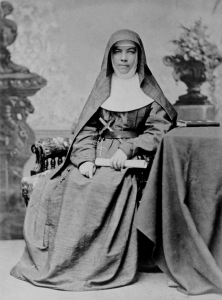 As in the case of any trauma, our first challenge is to come to grips with reality. Ignoring the situation won’t make it go away. In the process, we must, of course, take whatever steps are needed to safeguard our emotional and mental health. Accepting help if needed is part of this. When we are helpless, maintaining pride won’t help. I think of Mary MacKillop, a strong and independent woman, now having to have someone bathe, dress and feed her in the weeks following her stroke. People who have lost their livelihoods and have to depend on the charity of others can feel incompetent and resentful. We grieve with them as they adjust to their new situation.

An old adage says, ‘Failure is not fatal: it is the courage to continue that counts.’ We admire those who show courage. We give them bravery awards and recognise the qualities they display as they battle against the odds. ‘Character is formed in adversity’, they tell us. While all of this is true, those going through hard times often feel less than courageous. They just keep putting one foot in front of the other. It is only in looking back that we can acknowledge that something greater than ourselves kept us going despite the anguish we felt at the time. For Mary MacKillop, her trust was in a God whose love sees us through every evil, she wrote:

Let us pray for the ever dear Will of our good God to be done, and in the end we shall see what peace and happiness will result from all our sorrows.Mary MacKillop