On 1 April 1981, a community of Sisters of Saint Joseph of the Sacred Heart touched down at Lima Airport to learn that they were illegal immigrants 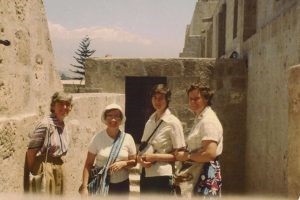 Thus, began the process of finding one’s way in a new culture going forward armed with a year’s preparation at the Columban’s Pacific Mission Institute – but with no Spanish.

They were Sisters Elaine Walker, Edith Prince, Dorothy Stevenson and Ursula Hoile, each from a different province of the Congregation.

After language school, the foursome took up residence in a rented apartment with no water and clandestine lighting which made a joke of the instant-hot-water-shower on both counts. It was 8 August 1981. This was home for three years in the enormous parish of Columban Associate, Leo Grant, in the northern district of Lima. The area where the Josephites ministered had two Mass centres, one of which consisted of some assembled bricks and the other either in a school or under the sky, depending on the sentiments of the authorities on a given Sunday. The number of Mass centres grew to between 20 and 30 and the area became a separate parish, and later still was itself divided again when the whole area became a diocese. Invasions over the years, of people desperate for a place of their own, filled all empty spaces around and beyond the Sisters.

Huasahuasi, in the Central Andes, became the first opening outside of Lima when two sisters went there in 1987. It was here that Irene McCormack lost her life at the hands of the terrorists in 1991. Because it was considered an unsafe area, no sister returned to Huasahuasi, but eight years later the Sisters opened a house in the nearby town of Tarma at the request of the Bishop and became involved in education, in working with women and in Parish ministry. The Sisters left Tarma in 2018.

In 1995, one of the Sisters moved to Pitumarca, a rural town in the Southern Andes near Cusco. She began her ministry there living for a short time with the Sisters from the Cruzada Congregation who were preparing to leave the district. After ministering for some years on her own, she was joined by another Josephite. They worked hard to leave a flourishing ministry, promoting the sale of the lovely products the women make from alpaca wool, native to Peru. They also developed a community-caring spirit for the elderly and the sick. The Sisters left Pitumarca in March 2011. 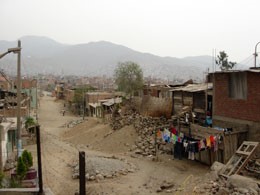 A formation programme began in 2001 for Peruvian candidates. In view of the language difference, novitiate in Australia was not practical. A number of young women have spent time – little or a lot – discerning a possible call to our way of life. As a consequence, a small number of Peruvians have become full members of the Congregation, have made their life commitment and are ministering to and with their own people.

One of the Sisters began ministering in the jungle, in Pucallpa in 2006, being involved in Parish ministry. She was later joined at different times by another sister. Over the following years the Sisters also ministered in the rural villages of Tournavista and Curimaná. The next move was to the large jungle town of Iquitos where two Sisters worked in education and the other continued her parish ministry. In 2020, one sister continues her ministry in Iquitos involved in Parish work and youth training.

In 2018, a community was formed in Macari in the Southern Andes, where the two sisters were involved in education in the Fe y Alegria school there. One sister remains there in 2020 in a leadership role, assisting also the Fe y Alegria schools in San Juan de Oro and in Tarma. The Josephite ministry in Lima was initially with people who migrated from the Andes and the jungle, trying to establish themselves in the city, desiring a better education for their children and escaping the terrorism of the 1980s and 1990s. The second generation had a need to find more land on the outskirts of Lima and the sisters have moved with them. In other settings sisters have worked with and among marginalised people, especially women and prisoners. This work continues today with one of our Josephite Affiliates continuing the work in the prisons.

More recently our ministries in Peru include education – both institutional and parish based, parish ministry, youth leadership training, energy therapy, working in a leadership role in the Fe y Alegria educational system, as well as being part of the Inter-congregational groups working against human trafficking and for justice and peace. In recent years we have established a therapy centre, Mary MacKillop Huasi, for children with special abilities whilst maintaining two groups formed many years ago which provide activities and companionship to children and young adults with special abilities. These gatherings also provide support and companionship to the parents of these special people.

The predominant concern is to be a friendly presence and support among those who are on the edges of both church and civil society, encouraging belief in themselves and helping them to achieve small goals, working together in trust and friendship. Local needs have always been the major consideration in determining initiatives.

In March 2009, the Josephite Peru mission became a Region of the Congregation with its own local governance. In December 2010, the two sisters living in Brazil, formally became members of the Peru Region. Later in 2014, in the restructuring of the Congregation, Peru and Brazil became part of the TransPacifico Region, which also included New Zealand and Queensland. In 2019, with the dissolution of the TransPacifico Region, the community of Nova Esperanza, comprising the Sisters in Peru and Brazil, was once more placed under the responsibility of the Congregational Leadership Team.

From the beginning until now, the Sisters’ presence in Peru has been possible only because of the support of the people with whom they worked. As together they developed common food kitchens, health groups, catechesis etc, the sisters learnt about the Peruvian culture and the people came to understand how to establish groups that could develop their own leadership and structures. 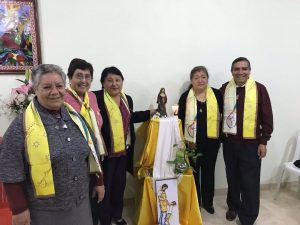