The story of the Sisters of Saint Joseph in Victoria is very much connected with Mary MacKillop. 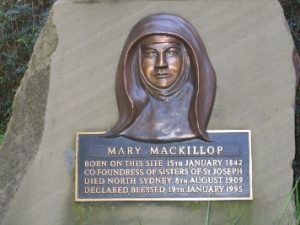 Victoria is the birthplace of Mary MacKillop, the first Sister of Saint Joseph. Mary was born in Marino Cottage, Brunswick Street, Newtown (now Fitzroy) in 1842. Today, a plaque honours Mary’s birthsite where people can pray. Across the road, at the Australian Catholic University (Melbourne campus), a sculpture of the young Mary gazes at her birthplace.

Mary was baptised and received her first communion and confirmation in St Francis’ Church in Lonsdale Street, Melbourne.

At the age of fourteen, Mary became governess to the adopted daughters of Mary and Joseph L’Estrange in Richmond, then worked at Sands and Kenny, Stationers, in Collins Street. It was from Melbourne that Mary went to Penola to become governess to her Cameron cousins, and first met Father Julian Tenison Woods. Together they established the Congregation of the Sisters of Saint Joseph.

Growing up in the new colony of Victoria, Mary was very aware of the hardships and difficulties endured by the poor. As a Sister of Saint Joseph, she witnessed the needs of the society of her time and addressed them through education and social work. As a result, schools, orphanages and homes for the destitute were established.

When Mary returned to Victoria in 1890 as Mother Mary of the Cross, it was to open a Josephite school at Numurkah. Father Michael O’Connor, the parish priest, had first met Mary in Penola when he succeeded Father Woods as parish priest. His request for Sisters of Saint Joseph to open a school in Numurkah was granted in late 1889, and in January 1890 four sisters arrived by Cobb and Co coach to establish the first Victorian Josephite school. 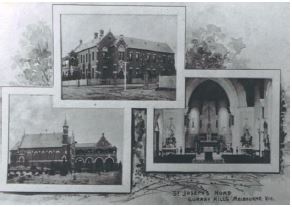 From 1890, the first Josephite schools in the Archdiocese of Melbourne were established at Bacchus Marsh, East Melbourne, Footscray, Yarraville, Williamstown and Newport. In 1891, at the request of the second Archbishop of Melbourne, Thomas Carr, the Sisters acquired the St Vincent de Paul Children’s Home in Surrey Hills, with its debt. Mary went there in 1891 as “Beggar in Chief” in her native city and worked hard to make a home for the children, helped financially by friends. The Sisters of Saint Joseph continued to care for children at Surrey Hills until 1980.

Archbishop Carr also invited the Sisters to establish a Providence for destitute women. This opened in 1891 at 43-45 Latrobe Street comprising a convent, refuge for women and children’s night school. In 1892, the Sisters advertised a home for unemployed servants and the Providence moved to ‘Nottingham Place’ at 535 Victoria Parade and then to ‘Floraston’ at 39 Victoria Parade where women and girls employed in warehouses could board. 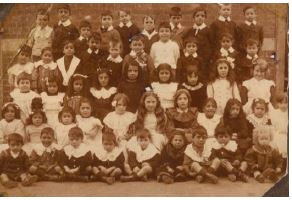 In 1897, the Sisters of Saint Joseph opened the Catholic Poor School in a two-roomed cottage in Cumberland Place, behind the original Providence. It provided a basic education for children from the nearby slums. In 1898, Archbishop Carr arranged for a new brick convent/school building and provided for its upkeep. Mary visited the school several times taking lollies for the children. At the end of year function in 1901, her brother Father Donald MacKillop SJ was present when Dean Phelan distributed the prizes. The school continued to provide an education for the children of the poor until 1926. A plaque was erected in Latrobe Street in 1997 to mark the site of the first Victorian House of Providence and St Joseph’s Poor School, both opened by Mary MacKillop. 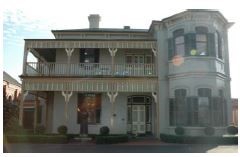 In 1901, at the request of Archbishop Carr, Broadmeadows Foundling Hospital was established for single mothers, babies and trainee nurses. By 1922, it had expanded to accommodate no less than five nurseries. Many mothercraft trainees entered the Sisters of Saint Joseph as a result of their involvement at Broadmeadows. In 1922, St Anthony’s Home for Children was established at Kew, while the Carlton Receiving Home cared for young women until the 1970s. 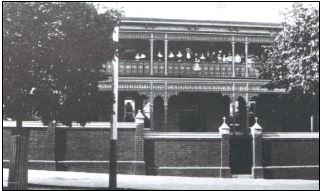 At the request of the Archbishop, Mary bought land in Albert Street, East Melbourne in 1901 for the erection of a new permanent Providence, providing a home for women and children. The facility doubled as a Province Centre until 1910. An adjoining two storey residence was purchased by the sisters in 1920 and later became a Hostel for country girls. The buildings are now listed as heritage and after restoration provide the centrepiece of the Mary MacKillop Heritage Centre which was opened in November 2007 as “a place of inspiration and vitality which manifests and promotes the spirit and charism of Saint Mary MacKillop and the Sisters of Saint Joseph.”

In 2019, the Mary MacKillop Musuem was awarded Accreditation by Museums Australia (MAP). The Museum is visited by many people who also spend time in prayer in the Centre, in this holy place where Mary’s spirit is present and experienced in the galleries, the chapel and the Contemplation Room. The Centre is a spiritual, reflective place.

On 7 August 1997, MacKillop Family Services came into being. This refounding of the welfare works of the Sisters of Mercy, the Christian Brothers and the Sisters of Saint Joseph has enabled these works to continue into the future, now Australia wide.

As well as these important social welfare ministries, the Sisters of Saint Joseph opened schools throughout the Melbourne Archdiocese and in isolated areas of the Sandhurst, Ballarat and Sale dioceses. With the influx of migrants to Victoria in the 1950s, many new primary schools were opened and sisters taught large classes. Some sisters went on Motor Missions to bring religious instruction to children in remote areas. Others taught music to private pupils, charging a modest fee as a means of income. In 1951, a Commercial and Domestic Science School was established at St Monica’s at Footscray. In 1963, Mount St Joseph’s Girls College was built at Altona to provide secondary education for girls from the western suburbs of Melbourne.