Mary MacKillop, an Example of Compassion

More than ever the poor of this world, as well as the rich and famous, suffer from a hunger of some kind.

The words and actions of Jesus, often accompanied by miraculous results, are signposts for our Christian lives.

The recent biblical reading of the story of the raising of the daughter of Jairus opens up a deeply human Jesus who tells the family to give her something to eat. (Luke 8: 55)

END_OF_DOCUMENT_TOKEN_TO_BE_REPLACED

Mary MacKillop, a strong woman of deep compassion, had a real love for the poor. Her love of God led her to reach out to the most deprived and despised in the colony in her time. Joan Healy rsj wonderfully describes this phenomenon:

God’s Spirit wove the threads of her circumstances into a spiritual fabric resilient enough for her tumultuous times and ours. It is spirituality tough and tender, simple and practical, grounded and mystical. It led Mary to seek and serve God at the margins of Australian society, where poor people struggled in the remote outback and sordid slums of the rapidly growing cities.1

Mary’s greatest concern was for the marginalized in society. Her deep care led her and the early sisters to set up places for older women, especially those who were frail. She demonstrated support for young women recently released from prison by giving them shelter and set up an orphanage for the neglected children.

END_OF_DOCUMENT_TOKEN_TO_BE_REPLACED

A mother’s love is epitomized by sacrifice, self-giving, nurturing, shaping and supporting.

Mothers rejoice in the creation of a child and enjoy the happiness of family life.

Flora MacKillop was an exceptional mother to her children, despite shouldering many of the burdens of the family alone.

END_OF_DOCUMENT_TOKEN_TO_BE_REPLACED

Flora – A Woman of Faith

April 17, 2021 Flora MacKillop (née MacDonald) was born in The Ben Nevis (Hotel) in Fort William in the Scottish Highlands in 1816. At the time her father Donald was the proprietor. She was the only girl with two brothers, Alexander and Donald. The family migrated to Melbourne in 1840 with their mother Catherine, while their father came later after he had paid off some outstanding debts at home. He eventually arrived in 1842 after the birth of his granddaughter Mary.

Their voyage was marred by tragedy, for Alexander aged 28 years, fell overboard during a fit of delirium brought on by an attack of typhoid fever. They eventually arrived in Melbourne in April 1840; however the sorrowing family had to spend two months in quarantine.

END_OF_DOCUMENT_TOKEN_TO_BE_REPLACED

Strong women are rising up and making their voices heard in the workplace, in society and in the home.

The Australian of the Year, Grace Tame at a recent march for justice, implored women to be united in stamping out patriarchy. She boldly reminded us that allowing to let fear stop us from doing anything enables evil to thrive in silence.

END_OF_DOCUMENT_TOKEN_TO_BE_REPLACED

Reflecting on Mary MacKillop’s eventful life there is a realisation that she lived a type of nomadic existence. 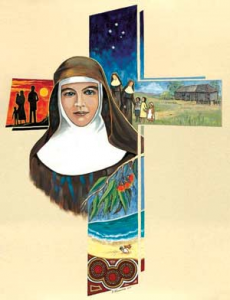 Her grounded spiritual approach to life enabled her to travel to establish new foundations and to meet the needs of the sisters and the needs of the times. Her journeys took her to many parts of the continent by many means of transport. As a woman of this era she imbibed a remarkable knowledge of the land and the conditions that ordinary Australians endured.

Her journeys were always taken in the spirit of Joseph. Joseph experienced many journeys into the unknown. We think of his life as being hidden and silent, yet he was a strong man of his time seeped in faith and spirituality as he protectively and courageously took on this special role. We are grateful for his witness of the Incarnation, for ensuring a safe return to Nazareth, for searching for Jesus, for teaching his child and for preparing Jesus for the enormous ministry he was about to embark on. Pope Francis reminds us:

Yet God acts through events and people. Joseph was the man chosen by God to guide the beginnings of the history of redemption. He was the true “miracle” by which God saves the child and his mother. God acted by trusting in Joseph’s creative courage.Pope Francis, Patris Corde

Mary Cresp rsj expresses this remarkable influence with the following:
Mary MacKillop drew from Bethlehem-Joseph’s inability to provide out of his own resources for those he loved, a consciousness of our dependence on ‘Diving Providence’. This was a mark of her spirituality that permeated her whole life. Mary Cresp rsj, In the Spirit of Joseph, p.249
Further to this, the author goes on to speak about Mary MacKillop as witnessed by Australians.

…Many writers, artists and other social commentators, Christian or not, acknowledged that Josephite spirituality illustrates the earthy spirit of Australia.Mary Cresp rsj, In the Spirit of Joseph, p.251

In his Apostolic Letter With a Father’s Heart (Patris Corde) Pope Francis has proclaimed this year as the Year of St Joseph.

Mary MacKillop must be rejoicing and acclaiming Pope Francis from her Godly surroundings on such a profoundly wise and appropriate declaration of our patron St Joseph!

Julian Tenison Woods, our co-founder’s experience whilst in France with the Sisters of St. Joseph of Le Puy inspired him to want sisters with the same spirit of humility and the desire to live a life of service among the ordinary people. It was not possible to bring these religious to South Australia, so Julian and Mary agreed that the new order of the Sisters of Saint Joseph of the Sacred Heart would imbibe a similar spirit calling on the example of St Joseph.

In a letter in March 1893, Mary wrote to the sisters about St Joseph’s hidden, humble life of St Joseph.

This humility is something wonderfully beautiful in itself. My sisters this was a ‘quiet humility’ … grounded on submission to the adorable will of God. It was a humility of heart, not of words … a silent, not a noisy humility.Mary MacKillop, March 1893

Mary urged each sister to demonstrate her gratitude by ministering with a generous, faithful spirit. She writes about St Joseph:

Guard the spirit of charity, the spirit of charity so dear to him … let us try to prove ourselves grateful children by closely imitating his hidden virtues, particularly his wondrous humility and obedience. In every difficulty, whether in school or convent, apply to him with confidence and you will never be disappointed. … In St Joseph’s Care I Leave You. Mary MacKillop, 1873

Pope Francis reminds us in his Apostolic Letter of this self-giving, hidden, humble man.

Joseph found happiness not in mere self-sacrifice but in self-gift. In him, we never see frustration but only trust. His patient silence was the prelude to concrete expressions of trust. The logic of love is always the logic of freedom, and Joseph knew how to love with extraordinary freedom. He never made himself the centre of things. He did not think of himself, but focused instead on the lives of Mary and Jesus.Pope Francis, Patris Corde 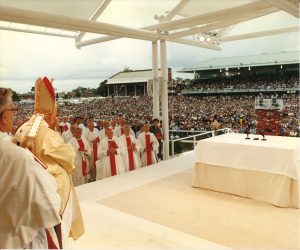 I remember well, sitting high up in the stands at Randwick Racecourse watching the dozens of buses drive in to drop off the thousands of people who gathered to celebrate Mary. It was wonderful that we her Sisters, sat where we liked that day. We were all there as one, honouring and celebrating our Aussie sister. Such excitement amid the mud and slush.

I think Mary MacKillop would have been tickled pink that her Beatification Mass was held at a racecourse. After all, she was a horse woman and a true-blue Aussie. From her living in country places, Mary would have known well the significance of racecourse gatherings. Such events providing the opportunity to reconnect, network, to play, to dress up, to celebrate and to back a winner. 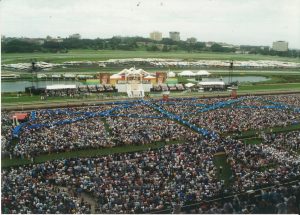 On 19 January 1995, Randwick Racecourse provided thousands of ordinary Aussies with a similar opportunity – everyone was there to back a winner, our Mary. On that day we acknowledged one ordinary Aussie woman’s holiness. A holiness grown and developed in her living her everyday life – her very ordinary Australian life and through some extremely tough times. She was and remains a true witness to God’s everyday invitations to her to choose life in all situations. This sparked great hope for all that day at the racetrack. The inspiration she gave assured us that in following her example we too could live lives of holiness. A holiness, not borne of great piety, but one emerging from finding and knowing God in the ordinary of everyday life.

I recall a time years later, when gathered with visitors from overseas around Mary’s tomb, when one visitor thought that the humble little chapel where Mary was buried, was not good enough for a saint and suggested we should build a Basilica for her. We all agreed that Mary would certainly not want that, and neither would we. She knew her God well in the groundedness of the ordinary – the classroom, the kitchen sink, the saddle of a horse, difficult family discussions, exclusion by those in authority and the ‘racetracks’ of life.

While she is held high as an exemplary model of Gospel living, she no doubt will accompany us on our journey as we remember her words:

There where you are you will find God. Mary MacKillop 1871