Journey of the Josephite Federation.

The establishment of the Josephite Federation was a long and at times frustrating journey of fifty years. To understand this journey, it is necessary to know something of the history of the Diocesan Josephite Institutes. They had been recognised by the 1888 Decree of Propaganda as distinct from the Sisters of Saint Joseph of the Sacred Heart. It had stated that those Diocesan Institutes which shall be distinct from the regular congregation, shall make some change in the habit and the rule and shall be approved by their respective bishops. Though originating from the same founders, Fr Julian Tenison Woods and Saint Mary MacKillop and sharing the same charism, they were different in their governing structures, being dependent on the various Ordinaries.

From the foundation at Perthville in 1872, numbers of young Sisters moved to distant places: to Whanganui (1880), Goulburn (1882), Lochinvar (1883) and Tasmania (1887). Having no on-going contact with each other (except through letters), they became isolated both by distance and commitment to their diocesan ministries.

The question of amalgamation was raised intermittently over the years. In the 1920s, on two occasions, Cardinal Cerretti, the Apostolic Delegate to Australia and New Zealand spoke of some kind of union without kindling any interest among the Sisters. The Archbishop of Wellington suggested that the Whanganui Sisters renew acquaintance with the original foundation with a view to amalgamation.

In the 1930s, Mother Aquin of Lochinvar wrote, with the support of Mother Benedict Seymour of Goulburn, to the major superiors regarding union. With her letter she included a detailed plan of how such a union might work.

Doubtless each Community feels that it is doing what, with God’s help, it can in its own Diocese but should we be satisfied to stay at that and not aim at a united strength and solidarity which should fit the Institute in the future to do so much more ably the work for which it was founded and to secure its integrity for the time to come? Yet the years are slipping away and the gaps are necessarily widening…..

Much to the disappointment of Mothers Aquin and Benedict, the plan was dismissed by the other Diocesan Institutes (mostly because they lacked the support of their Bishops) and union became a closed subject. Subsequently, the Goulburn and Lochinvar congregations applied for and received, in 1962 and 1963 respectively, final approbation as Pontifical rather than Diocesan Institutes.

In the 1950s, Pope Pius X11 provided the impetus to revisit the issue of union. His Apostolic Constitution Sponsa Christi and the congress of international major superiors, had urged congregations of women religious to update their customs and to move towards unions or federations. The major superiors of the Diocesan Josephite Institutes responded to this directive and met several times to discuss matters of common interest including the possibility of some form of amalgamation. 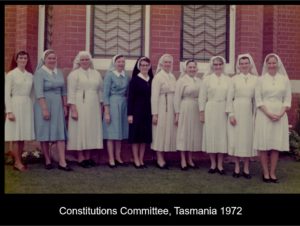 In 1964, Mother Adrian from New Zealand wrote seeking discussion and with the advent of a new Bishop in the Bathurst Diocese the way forward was emerging. With the publication of Perfectæ Caritatis, the Second Vatican Council’s decree on religious life, the case for some kind of union was mounting. In 1965 the five Diocesan Josephite leaders met together at Perthville for the first time since their meeting in 1928 at the Eucharistic Congress. The defining meeting was held on 11 September 1965, at the Goulburn Sisters’ house in Neutral Bay when sixteen Sisters representing the five Diocesan Institutes made the decision to form a Federation. Interim office bearers were elected, Statutes were drawn up and the request to establish the Federation was sent to Rome for approval.

The much-longed for approval came in the form of a Decree of Establishment from the Sacred Congregation of Religious. The Sisters of the Diocesan Institutes rejoiced to read:

…. this same Sacred Congregation, solicitous for the spiritual and temporal welfare of the same Institutes, having maturely weighed everything that concerns the matter, approves and confirms the Federation with the title, Australian-New Zealand Federation of Sisters of Saint Joseph and likewise the proposed text of the Statutes, in a way, however, that each Congregation of the Federation included remains in its own present juridical state ….

After a long journey and many anxious moments, the Australian-New Zealand Federation of Sisters of Saint Joseph had become a reality. In the subsequent years Sisters from the five congregations of the Federation enjoyed decades of support, collaboration in ministry and above all, treasured friendships.