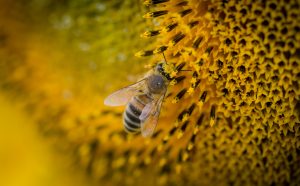 My ageing parents helped raise two grandsons for a while. Whenever the boys were away, the signals for their return were the tyres of the car bringing them home rattling the cattle-grid outside our home, and my mother saying with a smile, “Here come the honey-eaters!”

Ahead of the Church’s feast day commemorating the birth of Saint John the Baptist, I am musing that his parents, Elizabeth and Zechariah, might just have bred a similar love of honey into their precious boy, God’s gift in their old age.

When reading of John in Matthew 3:4 and Mark 1:1-8 we find him living in the desert, surviving on wild honey, and preaching his love for God’s word from the strength of it.

Perhaps his parents might have said as they saw him leave home and take up his adult ministry, “There goes the honey-eater!”

His authentic preaching of God’s challenging, yet merciful word, his witness to truth and justice, his compassion for those marginalised by inequality and his resulting martyrdom ensured that. (Lk 3:10-14; Mk 6:14-29).

There is a beautiful connection the Jewish scriptures make between fidelity to the word of God and honey-eating.

No doubt Elizabeth and Zechariah knew and lived from it, having experienced God’s revealing word even in the intimate circumstances of their own family life.

They had heard and heeded God’s revealing, in that true sense of the Latin for “listening” behind our word “obedience”.

Zechariah’s Benedictus canticle at the circumcision of John speaks of a faith lying both at the top of his and Elizabeth’s hearts and close to the tip of their tongues (Lk 1:68-79).

Their open-hearted, responsiveness to God in their life was clearly passed on to John, his life revealing he was born and bred to live out a personal mission in Israel’s prophetic tradition amongst his people.

We can reasonably assume that Elizabeth, Zechariah and John knew from experience the connection scripture makes in many places between ‘devouring’ the word of God and tasting honey.

Surely too, as John grew and took his stance in the world, the love of the word of God in which he had been conceived became a joy for him as spoken of in Ezekiel 3:1-4,

John, the baptiser of Jesus, was privileged to be called into existence to be Jesus’ precursor. One might also say that scripture reveals that Jesus admired John and was inspired by his unique witness. (Mt 3:1-12).

When they met, I suppose, in his honey-daubed camel skins, John may have been a sweet-smelling companion.

His tongue, nevertheless, did not resile from speaking God’s stinging word of truth in the direction towards which it was appropriately directed. (Mt 3:7-12).