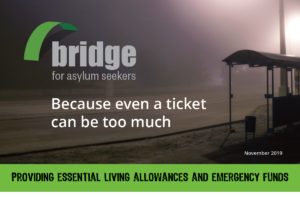 Belmore Park in Sydney has all those old trees, plenty of pigeons, and various patches of grass where people lie in the sun, read, or just sit around yarning. It’s been the site of many a demonstration, and is just far enough away from the ebb and flow of Eddy Avenue and Central Railway to claim the title of a peaceful spot.

People sleep in Belmore Park. Some are regulars, and some are not, like the family of a mother and five teenaged children. They had come from the Middle East where the mother had been tortured for political dissidence. They were all shocked by their plight, their asylum journey and new environment.

Workers from ‘Bridge for Asylum Seekers’ began to engage with them. It was hard to know if the family understood what was said, or even what was happening. Their faces often had a blank expression. The middle child, the most traumatised, took months before finally smiling.

Financial support provided by Bridge was critical, enabling them to settle in, find a place to live and send the children to school. This family are now renting their own house with members variously now working or studying. Belmore Park days have gone.

I have been a Patron of ‘Bridge for Asylum Seekers’ for many years. Bridge was founded in 2003 for the provision of emergency financial assistance to asylum seekers who have no alternative means of support. It has provided support to 2041 people during that time, including single men and women as well as families with children.

Bridge is an autonomous committee of Uniting NSW/ACT and is managed by a pro-bono Committee comprised of legal and refugee experts and community members with a range of relevant skills. Bridge is the largest provider of financial support to people seeking asylum in NSW. The organisation focuses its energies on fundraising and monitoring expenditure of funds rather than administering payments directly. Administration of payments is done through its partner organisation, the Asylum Seekers Centre (ASC) in Newtown.

Adverse policy changes by the Department of Home Affairs mean that people now find it more difficult to get work. This means that they require Bridge support for longer. In 2016 the average support time needed was nine weeks – now it is 20 weeks.

Bridge is a lean, well-managed and professional organisation. Over 95% of total expenditure was directly on asylum seeker support, with the remainder spent on operational costs and awareness-raising activities. Bridge has no office and no paid staff, and its technology and marketing support is provided pro bono.

For the past 16 years, Bridge has raised, administered and successfully acquitted approximately $250-400,000 per annum. Bridge successfully guards against risks associated with the project. They ensure that clients are not receiving any other financial support, that they have legitimate claims for asylum and that funds are not misappropriated. Organisational processes details are available on request.

Bridge helped the family in Belmore Park, just like they helped ‘Sahar’. She is a young single woman who escaped from state-sanctioned, gender-based violence and forced marriage in her home country. Bridge’s financial support meant that she was able to find safe accommodation and was able to travel to legal and medical appointments and to English classes. Her need for Bridge support ended when ‘Sahar’ gained work in hospitality. She is now rebuilding her life in the community and working towards her goals of furthering her education and career. Bridge welcomes the support of like-minded Australians who know that what we do to the least, we do to Christ.