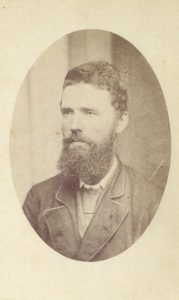 Early this year, I stood at the graveside of Alexander MacKillop. Fresh native flowers were displayed, honouring the father of Mary MacKillop, and our group listened to the story of Alexander’s time in Hamilton. I realised that Alexander was being acknowledged for his life’s effort and his contribution to faith development in his adopted country, fathering a daughter who was to be declared Australia’s first saint. There was no sense he was a failure or unsuccessful as some may have thought. Alexander’s classic education in both Rome and Scotland enabled him to educate his children in a time and place where few children had the opportunity for schooling. Indeed, all Alexander’s children were highly literate, active and above all, each truly practised a living active faith based on Scottish Catholic tradition and heritage. Three of his children entered religious congregations.

Peter MacKillop arranged for his brother Alexander, after an amicable separation from Flora, to move to Peter’s property in the Hamilton area. Flora loved Alexander but eventually could not live with him. The MacKillops and Camerons who emigrated from Scotland drove sheep from New South Wales to the Western District of Victoria, or “Australia Felix” as it was called. Rolling hills reminded them of Scotland and the settlers named many local areas, such as Dunkeld, after familiar Scottish places as the scenery reminded them of their heritage.

It was a time of peace for Alexander, amid such beautiful new yet familiar scenery, with time for reflection and prayer. From Plains Station Dunkeld, he wrote to Donald who had let his father know he wished to join the Jesuits. When staying in Hamilton itself Donald had accommodation in the hotel, and we have letters written by Flora from the Colonial Bank in Hamilton where she stayed from time to time.

As we enter Advent and look forward to celebrating Christ’s birth, we remember Alexander’s death in Hamilton on 19 December 1868. For Flora, December was not so joyous, as not only was it the month of her husband’s death, but also of three of her children: Maggie on the thirteenth, John in New Zealand on the sixteenth, and Lexie on the thirtieth – a time of anniversaries and pain!

Alexander’s daughter, Mary, often wrote to her Sisters as Christmas neared. This year the following is especially poignant:

Christmas is drawing near and with it, I trust, many graces and blessings. The year now drawing to its close has been an eventful and trying one for all of us and has taught us lessons which should not be lost upon us. Mary MacKillop, from Mother House, 27 Nov, 1881

What lessons have we learnt?