We learn from the Gospel of Luke that the first people to visit the newborn child, Jesus, were shepherds, Jewish men, sent by angels. 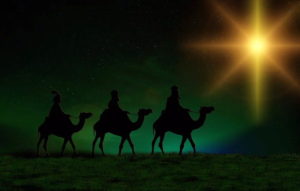 They left their flocks and found the newborn child in the stable of a Bethlehem inn. They were filled with great joy and returned to their sheep, loudly praising God and announcing to all and sundry what they had seen and heard.

Traditionally, on the feast of the Epiphany, we celebrate another group of visitors. This time the story is told in the Gospel of Matthew. From the east came some wise men, astronomers, who had seen a new star rising that they interpreted as being the portent of the birth of a great king. They followed that star as it went before them and led them to Jerusalem where they began questioning the populace thus: In what great house would they find the newborn king of the Jews?

This question caused consternation and word of the strangers’ quest passed from person to person until it reached the ears of King Herod. Herod, of course, saw a rival. He summoned the wise men and gave them instructions to return to him when they found this child and he, too, would go and pay him homage. Not likely!

Learning that the prophets had foretold Bethlehem as being the place where they would find the child they were looking for, the wise men left Jerusalem. Immediately, the star reappeared and went before them to Bethlehem and to the house where they found the child. They paid homage to him and presented their gifts of gold, frankincense and myrrh. Then these wise men, non-Jews, were warned in a dream not to return to Herod but to go home by another route.

What is the message for us in this story? The wise men followed the star and it brought them to the end of their quest. Do we each have a star that compels us to follow it to find our goal in life? Do we keep that star before us even though the journey may be hard and full of difficulties and setbacks? Nevertheless, the end of the journey brings us to the goal of all our longings.

What is the goal of all our longings? That question is for each one of us to answer. But may we, like the wise men, be lead to the place where we will find Jesus, our Emmanuel – God with us.