From a Josephite point of view, there can be no better example of what Father’s Day should encapsulate. 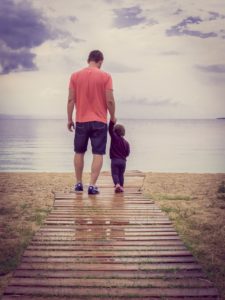 Here we have the Christian religion’s “father of all fathers” taking care of the “son of all sons”. One assumes that a father is to provide for his wife and family.  Regardless of how the modern family unit has been denigrated (if that is not too strong a word), the common belief is that the parent(s) are to take care and nurture the child(ren) of that union. If that is still to be taken as a base fact, then the “Holy Family”, of which Joseph and Jesus were members, provides us with a platform upon which we can base our assumptions of what is now known as Father’s Day.

It is really of no consequence to go into history to try and establish when, what we have today, was first “set in concrete”, suffice to say that while the intention was well meant, (as with Mother’s Day), the extension of that well-meaning has developed into full blown commercialism.

Only every so often in the mindless and endless tirade of advertising catalogues in the snail mail post, the television screens and phones are there any semblance of the “real” meaning of the day. Dad/father is depicted as a loving protector of the children in the catalogues and while the pipe and slippers image has disappeared due to the anti-cancer crusade against smoking, the message is still very clear…spend up big on your dad, give him multiple presents because he deserves it for the role he plays in guiding the family through the maze of difficult situations that confront the modern family. Most honourable!

If we can cast our mind back to Joseph however, I hardly think the “Nazareth Times” would have been running specials of any sort. Any advertising done in any way shape or form would have been by personal example. It was the clearest and most striking way of demonstrating anything.  Family values were no exception.

Remembering that there was some degree of confusion and, I dare say, “tittle tattle” surrounding Joseph and his fatherhood status, (“betrothed to a maiden called Mary”) it was absolutely essential that whatever Joseph did, had to be “above board” to all the local townsfolk as that special family came into the town, settled down and began the ordinary process of living as all the other families in the town were doing. Nothing very much seems to be clearly known about the first 12 years of Jesus’ life so that suggests that Joseph must have been doing a very good job at providing for his wife and son. Nothing untoward happened until “the Temple lectures”. 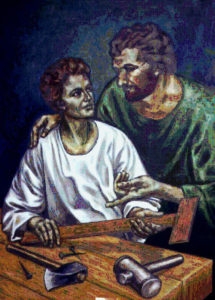 In their house, Joseph must have been tutoring Jesus in the skills of woodworking, manners, social communications and reverence to their God. Perhaps it was these human qualities that Joseph instilled into Jesus in those early years – with the undeniable help of Mary – that led Jesus to develop an uncanny understanding of human behavioural traits…. which were to cause him so much anguish in his adult life.

As far as Joseph was concerned, he had discharged his duty as “head of the family” and perhaps the only present he ever got from Jesus (the human Jesus) was a wink and a smile when some client had bought a piece of crafted wood and was pleased with it.

Sometimes a smile says more than any bought gift….Father’s Day.