The Feast of The Exaltation of the Cross – 14 September

I have a friend who exalts the Cross all year round. She is Sr Dorothy Woodward rsj of the Sisters of St Joseph of Lochinvar, NSW. Since 2006 she has painted over 700 crosses for Catholic Schools and Parishes.

A Cross’s significance is carried almost automatically, its shape alone being enough to remind many of Jesus. As the signature marked upon the bodies of the baptised, the Cross holds a sense of Christian belonging for many. It is like a ‘north-south-east-west’ blessing from across God’s universe, “in the name of Father, Son and Spirit”.

A Cross denotes the death and sacrifice of Jesus, executed in consequence of all he had said and done to free people from fear, judgement and exclusion.

For the believer, the Cross proclaims how Jesus accompanies human beings on the ‘crosses’ of their own painful experiences. The Cross shows how, by example, Jesus’ life saves human living from the miseries of selfish, competitive and abusive patterns of power over others. His way of responding to God’s call was authentically human and Godly. His compassionate, merciful, inclusively healing ways of relating with others reveals all that.

The Cross proclaims that his life was not only taken cruelly, but given freely ‘for us’, as he invited others to be ‘at-home’ here on earth and forever with the God he called Abba.

Dorothy’s crosses are not blank. They also carry carefully selected images of human life and meaning-making in particular contexts. They express the fulfilment of Jesus’ promise: 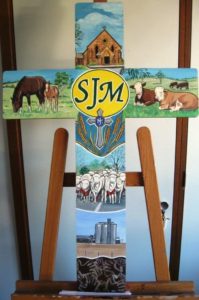 Consider one example, the Cross painted for St Joseph’s School, Merriwa in the Upper Hunter.

It pays respect to the Wiradjuri people’s presence on the Land long before the pastoralists settled in the 1820s, and it draws attention to ancient hand-prints still visible near Merriwa. It hints also towards ongoing sorrow for past experiences of inter-cultural pain.

The Cross features St Anne’s Catholic Church built between 1879-81, and the emblem of the Lochinvar Sisters, the founding teachers of St Joseph’s School from 1885, just 2 years after their young Order’s own founding.

Pastoral life is depicted through images of wheat, cattle and sheep farming and horse breeding, all subject to the sometimes-painful rhythm of seasons and fluctuating markets.

Finally, there is an honouring of the community’s joyous annual celebration of itself in the “Festival of the Fleeces” with its unique “running of the sheep” in red socks knitted by willing locals.

Whilst Dorothy’s Crosses do tell of Jesus’ life and death in human history, they also exalt the eternal Christ’s presence in the real circumstances of the here and now, the past and future of people’s lives.

In her artistry, Dorothy gives expression to that famous stance beginning Vatican II’s Pastoral Constitution, The Church in the Modern World: