Two Mill Hill priests of Saint Joseph’s Foreign Missionary Society from Mill Hill, London, England, were sent as missionaries to Aotearoa New Zealand and particularly to the Maori people. They arrived at Christmas, 1886, and were appointed to Matata by Bishop Luck of the diocese of Auckland. Their goal was to revitalize the faith among the Maori people. The bitterness of the Maori wars, the poor influence of some Europeans, and the lack of priests to maintain contact with Maori converts were felt keenly by the Catholic hierarchy. Mary MacKillop was asked for Sisters to staff the proposed Maori Mission school at Matata. 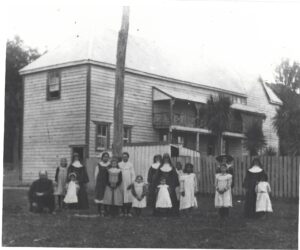 Mary MacKillop sent the first Josephite Community, Sisters Xavier Molony, Francis Fitzgerald and Louis Hoare in 1890 to work alongside the Mill Hill Fathers. They arrived in Matata on 9th February 1891 and as there was neither convent nor school ready for use, they stayed at the local hotel. A two- storeyed building with accommodation for Sisters and boarders on the upper floor and schoolroom on the ground floor was built. The school was opened on 3 August 1891 with a roll of 52 pupils. The attendance at school fluctuated. In 1895 Sister Xavier wrote about the cold experienced in the school.

Annie MacKillop accompanied Mary on her first visit to New Zealand. She has left a vivid picture of what travel would have been like. She talks of a dreadful road, up and down hills with the road just wide enough for one trap and not many resting places or nourishing food on the fifty-six-mile drive from the port of Tauranga to Matata – the last stage at night. It was only after Mary MacKillop sent the first Josephite community, Sisters Xavier Molony and Francis Fitzgerald that Mary and Annie realised how dangerous their first journey had been.

The letters of Mary MacKillop describe the conditions in Matata as she found them three years after the first school was opened. Mary was given a great welcome by the Maori People and she set about improving conditions for the Sisters, the pupils in the School, and for their families. Mary wrote a school report for “St Joseph’s Maori School Matata Bay of Plenty” in 1894. She noted the children’s progress and recommended that the Sisters give oral lessons in grammar from time to time.  Before Mary left New Zealand, she sent them kegs of butter, dripping, necessaries and wire netting which she had begged for while she was travelling about.