May 24 has been a significant date in Catholic history since 1815 when Pope Pius VII declared it to be the feast day of Our Lady Help of Christians—marking the date of his release from imprisonment by Napoleon during the French occupation of Rome in 1814.

In 1844 the bishops attending the first provincial synod of the Church in Australia decided that it be placed under the patronage of Mary, Help of Christians.  This happened at a significant time in our history. British settlement was just over fifty years old, the transportation of convicts was coming to an end, and the first elections in Australian history had been held in the previous year. Issues of land, immigration and education had begun to surface and the Church was becoming involved with these social problems. 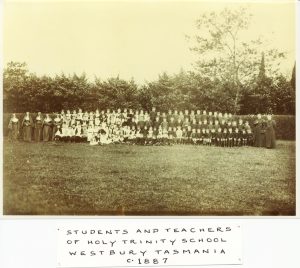 The infant church in Australia had a special reason for turning to Mary.  The British Government had forbidden priests to come to the colony at the time of settlement in 1788. The first Catholic priests, who arrived as convicts in 1800, had been convicted for “complicity” in the Irish 1798 Rebellion. One of their number was conditionally emancipated and permitted to celebrate Mass under strict conditions for about one year only. The first resident priests, John Joseph Therry and Philip Connolly, arrived in 1820. During those long years of deprivation of Mass and the sacraments, it was largely the Rosary that kept the faith alive.

For the Sisters of Saint Joseph in Tasmania, 24 May has an extra significance. It was on this day in 1887 that Sisters Francis McCarthy, Stanislaus Doyle, Joseph Eather, Patrick Nolan and Teresa Prendergast arrived in Westbury.  They had travelled from Perthville (Bathurst) to Sydney by train and then by ship to Launceston before arriving at their final destination – without doubt a long and often uncomfortable journey.

[i] Sisters from Bathurst had previously been sent to make foundations at Wanganui, New Zealand 1880, Goulburn, NSW 1882, Lochinvar, NSW 1883.)
[ii] Reference:   Josephine Brady,  St Joseph’s Island, ATF, 2012 pp 17-27.
[iii] Julian E.T. Woods, Rules of the Institute of St Joseph for the Catholic Education of Poor Children, Adelaide, 1867, Article 4.. It is interesting to note that in the Customs and Practices of the Institute of The Sisters of St Joseph of the Sacred Heart of The Archdiocese of Hobart, Melbourne, 1940, “as much recreation as is convenient is allowed”
[iv] After Angelus a prayer for the conversion of Australia invoking the intercession of Mary, Help of Christians, was part of the Sisters’ daily routine.
[v] Letter JET Woods to Sister Francis McCarthy, August 1887.
[vi] ‘Westbury Diary’, in Sisters of St Joseph Archives, New Town Tasmania, 1887.
[vii] The Monitor 29 May 1908

Photo from the Sisters of Saint Joseph archives in New Town, Tasmania. Used with permission.