Mary MacKillop and the pioneering Sisters of Saint Joseph of the Sacred Heart in Adelaide, South Australia had begun a House of Providence there in 1868 to minister to homeless women and children, giving them shelter, food and a chance to recover from whatever trauma they had experienced that left them in such desperation. 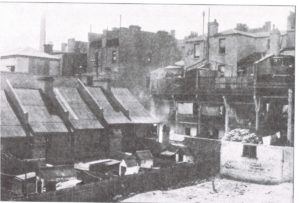 In 1880 the notion of a House of Providence was a new concept for the colonial residents of Sydney harbour. The work was totally dependent on the Providence of God to help the poor and destitute. The location around the port of Sydney on the western foreshore was called The Rocks because of the rocky and steep terrain upon which small, poor dwellings clung, offering shelter, small business enterprises and watering holes for thirsty sailors and desperate itinerants.

When the sisters left Queensland under trying circumstances at the end 1879 some came to Sydney at the invitation of Archbishop Roger Bede Vaughan OSB. Mary MacKillop decided that, rather than open schools in the inner city so as not to encroach on other Religious Sisters’ work, the Sisters would open a refuge for poor women and children. This idea was enthusiastically welcomed. The Vicar General Dean Sheridan was particularly supportive and enlisted the help of the clergy from other parishes. The need was evident, and the sisters were willing to meet that need.

The first House of Providence was a small rented house in Gloucester Street not far from St Patrick’s, Church Hill. It began on 6 March 1880 with Sr Ignatius Griffin and Sr Josephine Carolan along with 7 guests. By April it had 21 and was overcrowded! Because the house was rented it gave the sisters the freedom to move to bigger premises further along Gloucester Street. This second House of Providence, also rented, was called “Craig Terrace”. (From 1980, the Sirius Building, a Public Housing purpose-built block of units for people on low incomes stood on this site. It was controversially sold in 2019 for profit, market-driven accommodation, so ending the concept of the original House of Providence.)

The Ministry of the sisters flourished and drew the attention of the French Consul who was so impressed by the number of women and children being helped that he pledged a four-monthly contribution. The local shop owners also gave generously to help feed the growing number of residents.

The success however once again ensured the House was overflowing! By August 1880 the Sisters were compelled to move again to an even larger House of Providence that they could rent. This third House of Providence was at 79 Kent Street and it accommodated 12 sisters, 36 residents, including 22 children. Sister Bonaventure, the leader of Josephite Province of New South Wales lived here so it automatically became the Provincial House. The house was part of a 4 house Terrace building called ‘Winsbury’. It was located between two primary schools operating in Kent Street – one for the boys at St Bridget’s Hall School, 107 Kent Street and the other for St Bridget’s Girls’ School, 14 Kent Street, just around the corner from Argyle Street. This building is still standing today.

For more information please consider doing A Pilgrimage Through The Rocks. The booklet for this self-guided Pilgrimage is available from the Mary MacKillop Museum shop.