The Arrival of Flora MacDonald in Melbourne, Victoria. 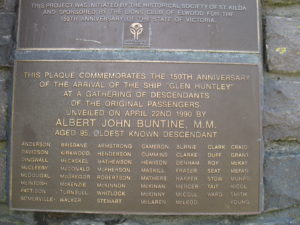 When Catherine MacDonald boarded the Government emigrant ship Glen Huntley she signed on as a widow with three adult children: Alexander, aged twenty-seven, Flora, aged twenty-three and Donald aged eighteen. Her husband, Donald ‘Drochaid’ MacDonald, boarded separately. He had been guarantor for his cousin ‘Long John’ MacDonald who was then deep in debt. Donald hoped to escape the Fort William bankers, but he was spotted on board, arrested and returned to shore. Bound for Melbourne, Australia, the ship left Greenock, Scotland, on 14 December 1839 and four months later on 20 April 1840, sailed into Port Phillip Bay. The passengers were unable to disembark because the ship was flying the yellow fever flag, a signal to those waiting on shore that the passengers must be quarantined.

As there was, as yet, no quarantine station in Melbourne, one was hastily erected at a place now called Point Ormond. Two camps were set up, one for the healthy and the other for those still suffering or dying from the fever and they were to be strictly segregated. On 24 April 1840, the passengers’ first footsteps on the soil of their new homeland took them to these temporary dwellings and there they would remain until it was safe to be released into the community.

Assigned to the tents for the healthy were Catherine MacDonald, Flora and Donald.  Sadly for the three, a few weeks before their arrival in Melbourne, Alexander ‘Sandy’ had perished from the fever and fallen overboard in delirium. He had been their mainstay and encourager as he constantly reminded them that God would take care of them. Flora’s first introduction to her adopted country was, therefore, a sad and anxious one. She knew that many of her Scottish kinfolk would welcome the little family once they were released from quarantine but what would the future hold for her in this young pioneer colony?  When would her beloved father be able to join them? The three MacDonalds pondered these questions as they waited for the ‘all clear’ which heralded their release about 18 June. To their relief, the family of John MacKillop was there to take care of them. It was to the home of Alexander MacKillop, in Collins Street that they were taken. Alexander, following the regulations of the day, guaranteed them employment: Catherine as housekeeper, Flora as housemaid and Donald as a farm labourer. 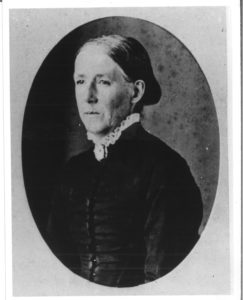 It was not long before love blossomed and Flora and Alexander were married on 14 July 1840 in the little wooden chapel near the site of the present St Francis Church. It was a happy day as they were surrounded by family and many relations. The one cloud for Flora was the absence of her father. In fact he was not to re-join the family until about April 1842.

Flora’s arrival in Melbourne after the traumatic voyage from Scotland and the dismal time of quarantine receded in her memory on her wedding day as she looked forward to a bright future. She could not foresee the life that lay ahead: a life of many trials and hardships through which she was sustained by her trust in God and God’s providence. Neither could she foresee that her first-born child, Mary, would one day be acclaimed as Saint Mary of the Cross, Australia’s first canonised saint.