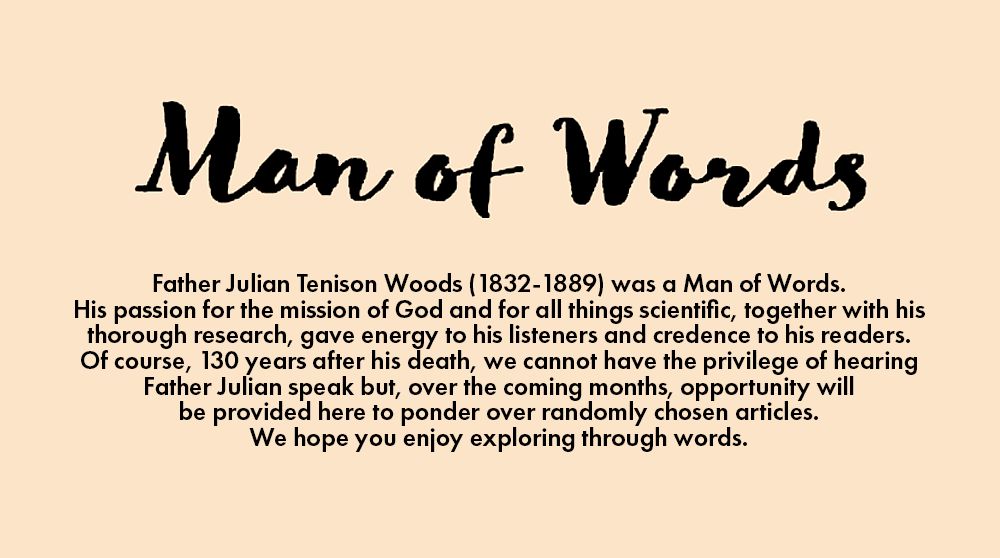 Tasmanian Forests: Their Botany and Economic Value [i] was the title that Father Julian Tenison Woods gave the paper he read at the meeting of the Royal Society of NSW on 5 June 1878.

In the paper Father Julian presented his observations of the forests he found in Tasmania from 1874-1876. He described various types of trees in detail and made comparisons with similar trees in other parts of Australia. He described meticulously the process of harvesting and sawmilling of timber, as well as the uses for which it is gathered. At times it is easy to imagine oneself standing among the stately trees and using all one’s senses to paint a picture of the surroundings.

I am sure this would have been a most interesting subject for Father Julian’s audience in 1878. Among other things, he explains how the locals tell the age of trees and, rather surprisingly, he portrays the life of young girls involved in the timber industry. Every now and then there are elements of humour, such as his descriptions of the inconvenience of ticks and mosquitoes.

Parts of this paper are often quoted by those who see a connection between Father Julian’s concern for the future of Tasmanian forests and the current state of our environment. This paper certainly brings Father Julian’s work and ideas into the 21st century!

Today we live in a visual and digital world. Father Julian Tenison Woods lived in a world of words. His background was journalism and he was a skilled wordsmith. However, no matter the medium, his message is as relevant today as it was in his time. As a Man of Words he has left much for us to ponder about the environment around us.

[i] See: http://nla.gov.au/nla.news-article8964746 | This article is also available online in booklet form from the National Library of Australia: https://catalogue.nla.gov.au/Record/1302660