Teachings from a 295-Year-Old House on how to Survive a Pandemic. 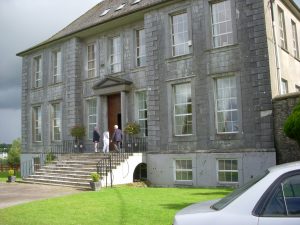 As the coronavirus pandemic was invading our world, in came a request to write about the grand old Irish house, Newmarket Court in County Cork. Initially this felt rather strange but in researching the life of the 295-year-old house with a chequered history, some strategies for surviving in the new-normal, which is so abnormal, were revealed!

Between 1615 and 1622 land was confiscated by the English Crown from the Cork McAuliffe clan. It was given to English settlers with the hopes of establishing a Protestant ruling class, colonising Ireland and disempowering the dispossessed Catholics, a plan which never came to fruition. In c.1725 a grand house was built on the confiscated land, for the English Aldworth family. The next 197 years saw generations of Aldworths living in Newmarket Court and vacating it permanently in 1921 during the War of Independence.[1] During the Civil War of 1922-1923, the Free State Army occupied the empty Newmarket House.[2]

The Josephities, at the 1925 General Chapter, decided to establish a house in Ireland for girls wishing to become Josephites. Mother Laurence O’Brien and Sr Francis Moore arrived in Ireland in 1926 to purchase a house. Newmarket Court and the surrounding 80 acres were on the property market, consequently the sisters bought the property. With the arrival of four Josephites on 1st November 1927, Newmarket Court became St Joseph’s Convent and a once Protestant and Free Mason stronghold metamorphosed into a Catholic Convent and a Juniorate for aspirants to religious life. 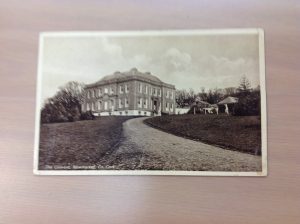 The first intake of girls arrived in December 1927 and for the following 46 years, a steady flow of teenagers undertook a routine of study and prayer as they discerned their vocation and prepared for Australia.  During the restrictions to sea travel because of World War II, the Juniorate evolved into a novitiate, where a number of young women were professed as Josephites.

Over the life of the Juniorate, three hundred and twenty-one young women travelled to Australia to become Josephites. Two hundred and fifty-six continued as Josephites, ministering through education, nursing, social work, pastoral care and administration, to the poor and needy in Australia, New Zealand, Peru and Ireland. By the 1960s, due to various theological and sociological reasons, the numbers attending the Juniorate decreased, necessitating its closure in 1971 and its sale in February 1972. The buyer planned to convert it into a retirement home but this dream never realised. In 1982, it changed hands again and became The James O’Keefe Memorial Institute offering various courses to meet the needs of the area. [3]

To conclude, it was important to revisit the grand old house, to recall its story and to discover the strategies that kept the old building alive and vibrant for 295 years. It teaches us, that survival and living through the new-normal of the pandemic, call for the same strategies of creative changing, adapting and evolving; constant alertness for the new and life-giving; courageous embracing of the opportunities for vibrant metamorphoses while sincerely acknowledging what was, is over and needs leaving behind!  And so proclaims the grand old house in the time of a pandemic!

Footnotes:
[1] This was a war between the forces of England and the Irish Republican Army and its volunteers.
[2] The Civil War resulted from the dissatisfaction many Irish felt towards the partition of Ireland into North and South. Six counties in the North of Ireland were claimed by Britain and the remaining twenty-six counties belonged to The Irish Free State.
[3] For more on the Newmarket Story, read pages 198 – 206 and 212 – 221 of The Letter Under the Pillow by Clare Ahern