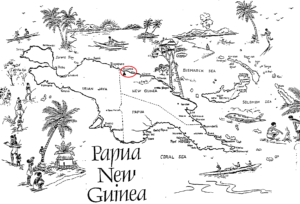 Fifty-eight years ago this month, four Sisters of St Joseph from Goulburn, New South Wales set out to undertake missionary work in the far north west of Papua New Guinea.

In 1960 the Franciscan bishop of Aitape asked the Passionist Fathers to take responsibility for missionary work in the north western part of his vast tropical diocese. Vanimo was the main centre in this region. Four Passionist priests and a brother arrived there on 10 March 1961 to commence ministry among the 45,000 people scattered throughout the region.

In 1962 the Australian Passionist Provincial, Father Charles Corbett, commenced negotiations with the Sisters of St Joseph of Goulburn to send a community of Sisters to staff the newly opened primary school in Vanimo and to work alongside the priests in the mission field. On Sunday 28 February 1965, four sisters – Sisters M Annette O’Loughlin, Andre Guthrie, Charles (Patricia) Ryan and Julian Hunter left Sydney for Vanimo.

Four days after their arrival and welcome to the Mission the Sisters took over the running of St Therese’s School, which in 1965 had 200 students enrolled including 35 boy boarders, aged between 6 and 16, from outlying districts too distant for them to attend school daily.

As well as teaching in the school, the Sisters visited families in the villages, assisted in the medical clinic and trekked through jungle and across rivers to visit the mission outstations for catechetics and pastoral visitation. They organised classes for women and girls to encourage good nutrition and hygiene and set up opportunities for the women to attend dressmaking and cooking classes.

The Sisters of St Joseph of Perthville opened a mission in Suain in the Aitape Diocese in 1967. Following the formation of the Australian New Zealand Federation of Sisters of St Joseph each member Congregation agreed to try to have representation in these mission stations. From 1969 Tasmania provided Sisters to work in Vanimo, in 1977 Lochinvar made Sisters available for both Vanimo and Suain. From 1978 Wanganui made Sisters available to work in the missions. In 1980 the Federation Council took over responsibility for the missions in Papua New Guinea.

Sisters of St Joseph remained in ministry in Vanimo until the end of 1996. In total 23 Josephite Sisters lived and worked in Vanimo and surrounding areas and had their hearts captivated by its people. They had shared their simple life and faith, been challenged by climate, terrain and the vagaries of remote tropical living, and remained steadfast in imparting God’s Love within the developing Church of this missionary outpost in Papua New Guinea.