Grounded in Truth: Walking Together With Courage. 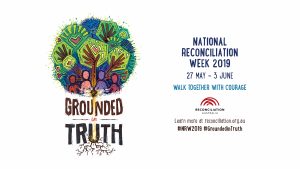 Australian Story recently featured the famous and very popular folk/pop quartet “The Seekers”. Listening to their story and particularly the story of their breakup and ongoing relationships, gave me some insight into what might be involved in creatively living into or engaging with this year’s theme for National Reconciliation Week –Grounded in Truth Walk Together With Courage.

The Seekers formed in Melbourne in 1962 and in 1964 travelled to the UK on the Fairsky as “on board” entertainment. Once in the UK they became very popular and were signed up by EMI Records. However Judith Durham by her own admission was a perfectionist and sometimes felt artistically on another page to the three men. In 1968 after an incident on stage in New Zealand she decided to act on her growing desire to go solo, which spelt the end for the Seekers. For Bruce Woodley this caused an end to many of his aspirations, and just when they were being offered a new record deal.

Years later Bruce wrote to Judith because he felt uneasy in his heart, about the resentment towards her, that he was carrying. He wanted her to know how hurt he was by the breakup and how it affected him. Judith could not believe what she was reading. She had no idea of Bruce’s feelings, as for her, she had given them all notice of her plans, she thought they were all okay with them. In 1990 after Judith’s car accident the group rallied around her. When Bruce and Judith met, Judith apologised to Bruce and said sorry for the hurt she had caused him. Bruce was impressed by her bravery in saying sorry and for him he could finally let go of his resentment and hurt.

The Reconciliation Barometer, a biannual survey undertaken in Australia which measures the progress of reconciliation between Aboriginal and Torres Strait Islander people and non-Indigenous Australians, indicates that 80% of the general community and 91% of Aboriginal and Torres Strait Islander peoples widely believe it’s important to undertake a formal truth telling process, in relation to Australia’s shared history.

Reconciliation is ultimately about relationships and like all effective relationships the one between Aboriginal and Torres Strait Islander people and other Australians must be grounded in truth, there can be no trust without an honest, open conversation about our history. Karen Mundine, CEO Reconciliation Australia

Many stories of the Australian frontier have been hidden or denied. In telling some of these stories during March of 2019 The Guardian series, The Killing Times, counts the human cost of more than a century of frontier bloodshed and asks, are we ready for truth telling?

Dr. Paula Green the director of the Karuna Centre for Peacebuilding in the USA refers to Reconciliation as a “A Path of Courage, Commitment and Compassion. It was this for Bruce Woodley and Judith Durham. What can it be for us?

During NRW, let us also be inspired to ‘walk together with courage’ as we contribute to building stronger relationships based on truth telling. You might: