On 26 March we celebrate the 25th anniversary of the opening of Mary MacKillop Place Museum. 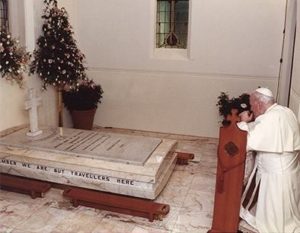 Over four years had passed since notifications from the fire department, the water department, pest control and building advisers prompted the necessary renovation of the whole complex of the Mother House, 7 – 9 Mount Street, North Sydney. Around the same time, the Congregation had been advised of the imminent beatification of Mary MacKillop. A Secretariat to prepare Australia for the latter event was formed and a process of consultation about the future of the Mount Street site was launched. One proposal being mooted was that we should sell the property and relocate the Mother House to a more Josephite i.e. underprivileged area. It was a group of Aboriginal people who informed us that this was Mary MacKillop’s place – she had lived and died here, this was where her mortal remains were buried, here her spirit lived on, and there was no way any of this could be re-located.

During her lifetime, Mary MacKillop had been the instrument through whom God had given a sign of compassionate love to our world. Over the years, it had become obvious that God was still working through her. Hundreds of people were visiting her chapel and tomb each week and in recent times they had regularly squeezed through narrow passages to view the Mary MacKillop artefacts that were on display in a small room near the administration offices. It was our job, surely, to facilitate what God was continuing to do, by providing a safe and contemporary environment so that pilgrims could experience God’s message made through Mary MacKillop for our times. 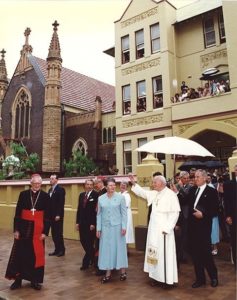 Helped by financial opportunities afforded by “the recession we had to have” and the generosity of wonderful people, we were able to embark on the complete repair of condemned buildings and the replacement of facilities. What is now the central area of the Museum was entirely gutted and reconstructed. Our advisers told us we must aim for the best and through their guidance we were able to engage at nominal rates the services of first-class technicians, artists, writers and other experts needed to set up such a venture.

This was to be a museum with a difference. Not only would it display objects and tell the story of Mary MacKillop but it would involve visitors in the story of how God works in all our lives to bring goodness into being. We hoped that everyone who would come to this place would leave inspired and energised.   The focus would be on the pilgrim People of God:

We are but travellers here Mary McKillop, 1867

The message would be addressed to people of all ages, relating to mid-primary-aged children as well as to adults. Some museums at that time demanded a lot of reading but this one would instead engage a variety of senses i.e. touch, hearing, sight and even action. It would to be alive.

By the end of 1994 all was ready. Before the Beatification on 19 January 1995, we had had Open Days where Sisters and other friends could sample what the Museum had to offer and try it out. While the hope had been that Pope John Paul II could at least put his foot inside the building, authorities told us that the security required and the precision of his itinerary would not make this possible. However his route during the Mount Street visit could incorporate walking past the Museum and blessing it from the outside. The Pope prayed, then, for all who would come here as pilgrims, and that God’s grace would envelop this place.

My diary entry for 22 January, three days after the Beatification, reads simply: “Opening of Mary MacKillop Place. Steady stream of people all day.” A highlight for me was when I went over to the coffee shop to see how things were going. I noticed a woman sitting at a table, tears streaming into her cup. I sat beside her and quietly asked if she was okay. She told me then of an argument she had had with a priest many years ago and therefore had left the Catholic church. “But, Sister,” she said, “going around today I’ve realised that Mary MacKillop could keep her faith no matter what priests or bishops or anyone else threw at her. If she could do it, so can I.” I came away from that encounter musing to myself, “If nothing else ever happens here, it’s been worth it all.” 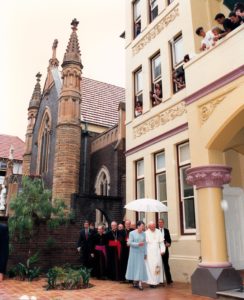 The opening of Mary MacKillop Place was a beginning and an ending. It was the end of a long journey that had involved setting a vision, drawing up policies, engaging personnel, dealing with legal and professional requirements, ensuring fiscal and human resources and above all, taking the risk that God would provide for its future at a time when many people thirst for spiritual nourishment. It was the beginning of another journey that continues to this day. About ten years after it had opened, I met a man who approached me as he was leaving the Museum and asked if I were a Sister connected with it. He then explained he was from England; he was not a Catholic but had heard of the Museum in his travels. “Sister, I want to tell you”, he said, “that this place is world-class. It has something I’ve never come across before, and you should make sure that everyone knows about it. It’s a real spiritual treasure.”

For Mary MacKillop Place to be known around the world is indeed a wonder. The wonder is that God continues to work in this place. Indeed, the place would be nothing if it weren’t for the people who are part of it. They are the witnesses of a God who worked through Mary MacKillop and who now works through them. I thank God for them and rejoice that what began as a problem with leaking pipes, broken walls, rising dampness, white ants and tinder-dry, unsafe housing has evolved into a ministry that throbs with vibrancy and meaning.