These nine days will offer an opportunity to pray and reflect on scripture, Mary MacKillop and your own lives, all within your own time. 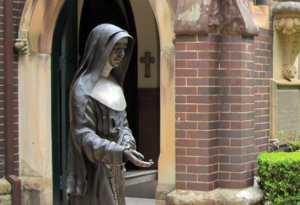 Friday 31 July marks the beginning of our Novena – a time when we can reflect on how the Scriptures, Mary MacKillop’s life and our life intertwine to encourage us in all that we do.

Thank you for praying together as we look forward to celebrating the feast day of Saint Mary MacKillop (Saturday 8 August).

Day One, 31 July: Opening To Our Potter God

So Small a Beginning: Part 4

You’re invited to watch the fourth part of Sr Marie’s conference speech, ‘So Small a Beginning’ below…

As December 1882 drew near, once more Mother Mary had a death in her family. Her 32-year-old sister Lexie, who was a Good Shepherd nun in Melbourne, died.  Lexie had helped Mother Mary in our first school at Penola. I cried in my heart for Mother Mary.

By the end of 1882 we had a foundation in the south coast of New South Wales, Albion Park. Archbishop Vaughan asked us to take over St. John’s School in Kent Street, Sydney. The people were very poor around Kent St, which was ‘a scene of much human misery’. Every day one of the Sisters cooked a substantial meal for the children and a hot drink was ready for them when they arrived at school. Even on Sundays the sisters cooked breakfast for the children and their parents. Our sisters truly were servants for the poor.

Mary MacKillop was a woman who championed the rights and needs of the poor in the community. Mary and the early sisters worked exceedingly hard to make a difference to the lives of the deprived. It seems remarkable that the sisters were able to provide such sustenance and assistance when they too relied on Providence. No doubt they sought out donations and went begging for food to enable this marvellous ministry to the poor.

Mary and the Sisters also knew suffering and death.

In 1873-1874 Mary travelled from Rome and then to London where the McDougalls invited her to stay at their house in Clapham Park and make herself at home during their absence. Mary then travelled to Paris and to her ancestral home the Braes of Lochaber in Scotland.

The servants had been well instructed, and Mary was overwhelmed. At first she was inclined to feel concerned at the luxury, but then she simply had a good laugh at the incongruity of finding herself in ‘a grand, high bed’ in such a place.  She stayed on a week after the McDougalls returned.  Although they were so kind, she was not really at ease in such surroundings, especially as she was some distance from the church. When Mr McDougall had to go to Australia, she was relieved to be able to return without offence to the cheap and convenient lodgings in South Street.”

From there she returned to Fort William, where illness delayed her again for a few days before she could start for Fort Augustus. She was overjoyed to meet on the canal steamer the priest who had consoled her in her loneliness at Versailles. He paid her expenses and handed her over to her relative, Dean MacDonald of Fort Augustus, with whom she then stayed for three days. The story was the same everywhere – helpful priests and kindly welcomes in convents. … Fr Bissett gave her soul ‘the help and encouragement it sometimes so sadly needed.’

This story of Mary’s journey, while not easy has brought the comfort of assistance, companionship and welcome. The pattern of Mary’s days is akin to our home journey during these past months as we have longed to gather with family and friends and move around outside our locality.

Let us ponder on Mary’s life during the long wait to hear from Rome about the future of the congregation.

Mary MacKillop Saint for Australia and the world, pray for us.

So Small a Beginning: Part 3

You’re invited to watch the third part of Sr Marie’s conference speech, ‘So Small a Beginning’ below…

So Small a Beginning: Part 2

You’re invited to watch the second part of Sr Marie’s conference speech, ‘So Small a Beginning’ below…

Paul Gardiner sj writes about Mary MacKillop’s experiences of being away from her family, friends and Sisters of Saint Joseph while on her overseas journey. 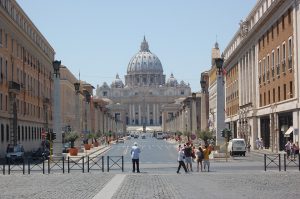 The physical elements in this poor health would have been reinforced by worries about her mission, the mixed success of her begging, the unpleasantness of cold refusals, uncertainty about Roman approval of the Institute, separation from those she loved, and concern about what was happening in Australia. Anxiety about travel arrangements, changing trains, long waits, the tedium of the travel itself, uncertainty about accommodation are things even a person in good health can find something of an ordeal.

Kindness and generosity touched Mary in a way she never forgot. She took care to keep in touch by letter with the various priests who had helped her during the ‘sweet string of Providential events’ in Scotland. On the other hand, she was sensitive to the coldness of some she approached for assistance. She did not take it as a personal affront but could not help reflecting that it was the rich, not the poor who refused her: ‘No welcome for the beggar from the rich ones from Edinburgh.’ She was more concerned about their deafness to the teachings of their religion than about being rejected. But it would be wrong to say that people with money never helped her. The McDougalls, Mrs Vaughan, Lady Gordon, and a number of people she met through them, became not only friends but also good benefactors.

No words can tell how my heart bounds at the thought of getting home.Mary MacKillop 1874

While Mary’s concerns did not revolve around social distancing or imposed isolation, she keenly felt the separation from the Australian scene and those she supported and loved.

Mary was only thirty-one when she undertook this enormous challenge and was recognised as the woman in the black dress. This journey was a major ordeal for Mary to cope with alone. The scenario Gardiner has painted for us is one of a strong and heroic woman in isolation.

Let us reflect on Mary MacKillop’s outstanding courage and heroism as we pray that we may model the tenacity and faithfulness that Mary lived so strongly.

What does Mary MacKillop Have to Say to us These Days?

The over-arching news these days concerns the impact of Coronavirus (COVID-19) on each of us.

Panic abounds as a result of a plethora of notices from government, local agencies and many others. Frequently, there has been pandemonium in shopping centres where an atmosphere of virulent fear results in panic buying and hoarding. Often panic leads to a focus on someone or something inane.  In this pandemic the panic lead to shortages of goods, most surprisingly toilet paper. Who would have thought that the search for this particular, usually insignificant, item would have called forth the best and worst in so many people! In addition to dealing with shortages, there has come into being serious limits to our right to move freely, to go about normal business. In varying degrees, we are forced to live in isolation which engenders fear as well as pain. Conversely, isolation can breed its own joys and creativity.

Easter week reminded us powerfully of pain, isolation and fear all embodied in the women who went to the tomb. The Angel told them “do not be afraid!” Their pain gave way to hope and, later, joy in knowing that Jesus had risen, was alive and had visited them.

I was drawn to read again the excerpts from Mary MacKillop’s diary from August to mid-October 1873. Mary had been in Rome to endeavour to have the Constitutions approved. The revised Constitutions were eventually completed with the assistance of several priests and sent to Pope Pius IX for approval. It was expected that the process would take quite some time. The heat of Rome had been burdensome for Mary who attributed much of her frequent illness to it. Her fledgling congregation was uppermost in her mind together with a deep desire to obtain materials for the schools, learn about the methodology in Germany and, perhaps, find some young women to join her. On advice, she decided to leave Rome, visit some schools and make her way to London depending on friends and the Providence of God to provide the means to do so.

On August 1 she set out on a journey that was truly formidable in that era. She left Rome by train and visited the Holy House at Loreto spending two days there. She then travelled to Bologna where she arrived at midnight, stayed in the station waiting room and left at 3.00am for Verona arriving there at 9.00am. She spent that day also in the waiting room and left at 3.30pm for Trieste where she arrived at 6.00am next day.

The Convent, where she hoped to spend the day, could not accommodate her necessitating her to go elsewhere. Compounding her dilemma was the fact that she did not have sufficient money to complete the journey.  That afternoon a kind lady took her to Rev Baron von Obercamp from whom she borrowed the money to continue her journey. She left Munich at 6.30pm to catch the train to Coblentz where she arrived at 9.00am next morning. She remained at Coblentz for a week “with the kind sisters” visiting schools, noting teaching methods and obtaining school materials from suppliers. Satisfied with her experience there, Mary set out to make her way to Dover to connect with friends in London. As was customary when crossing borders there were custom checks. At the Belgian border, the train stopped at Verviers where she had her bags examined. Being alone and unfamiliar with the station, she took the wrong train and found herself in Brussels. Mary wrote, “after a weary journey got at last to Ostend about 9.00pm. Had to stay the night in the Hotel.”  Next morning, she caught a steamer to Dover and then the train to London to join friends – friends who spoke her language and cared for her, thus somewhat alleviating her feelings of isolation…