Monday April 1 this year will be the 38th birthday of the Peru Foundation.

This date marks the actual arrival on Peruvian soil of the first Josephite sisters committed to staying and planting an off shoot of the Congregation there. In the following paragraphs I hope to describe this important day as they lived it.

At Sydney Airport on Monday 30 March, Sisters Dorothy Therese Stevenson, Ursula Hoile, Edith Prince and Elaine Walker gathered for the goodbyes. Sr Elizabeth later recalled ‘an aura of an exciting adventure’. [1] They came fresh from a beautiful Mass of Missioning on March 25 which left Dorothy observing:

‘I believe we must be the most prayed over and for community that ever took to the back blocks or anywhere else in the history of the Congregation. Surely we must survive out there’. [2]

The inevitable moment for final farewells arrived and they boarded their Pan Am flight at about 3 pm, leaving behind their known world and heading towards one as yet unknown. In Los Angeles twenty hours later, two Columbans they knew from Turramurra met them and welcomed them to their central house for a two- night stopover, a break which must have done wonders for their first experience of jetlag.

It was noon on Wednesday April 1 when they boarded the Varig flight for Lima. All went well until there was a hitch – the lights of Lima had come into view, but the plane kept circling. Three stewards appeared on their knees beside the sisters’ seats. Aided by a torch and a table knife, they peeled back the carpet and released the backup system to let down the wheel carriage. The plane landed safely at 11.45 pm and the passengers disembarked. How did the Josephites feel?

‘As I set foot on the tarmac . .  a tremendous feeling of joy, peace and uncertainty overwhelmed me’ . [3]
‘I was filled with excitement and joy as we stepped from the plane in Lima in the middle of the night . . Like being part of a birthing and the wonder, thrill and pain were all mixed up together’ . [4]

At the Immigration desk they found that they were met with total incomprehension. ‘The officers weren’t sure what to do with them. Obviously, something was missing. They were ‘escorted like some illegal immigrants into an office of the Minister of the Interior’ [5] where they sat helpless while forms were made out in duplicate recording name, nationality and address. Dorothy watching in horror as they wrote that she was an ‘Australian’, as she was from New Zealand. The only address they knew was a box number, which amused all present. 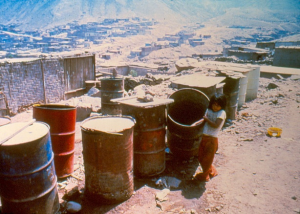 Armed with the top copy but bereft of passports, they emerged to claim their luggage and face Customs. Here the officer rolled his eyes at their ten pieces of luggage and held up two fingers to indicate that he would open two, so they chose two they knew would close again.  At this point an Australian Columban appeared and brought them outside to the welcoming party – four Columban sisters and six or seven priests, including Peter Doyle whom they already knew and Leo Grant their future Parish Priest.

The Josephites went in pairs to the sisters’ two communities, one in Condevilla and the other in Cueva. They had arrived but not much of Lima was visible. How did that feel?

‘Darkness prepared me gently for the reality I was to experience next morning’. [6]
‘That night I stood at my window and looked out at the lights . . and absorbed, in God’s presence, the realisation that this is my city. They are my people out there’. [7]
‘Thursday morning, I was woken by chooks – women and children calling – when I looked out my window we really were in Lima. My first reaction was to go down and walk amongst the people. I am grateful to be here’.  [8]

April 5, 1981:
‘We go from one new experience to another and we’re all looking for some feeling of belonging. Well, if not looking for it, missing it very much.’ [9]

October 1, 1981:
‘We have been in Peru six months tonight at midnight. We have some basic language, we have set up house, and the Lord is now leading us gently into the kind of service we may be part of in this Church. That’s a lot of blessings and it’s the feast of the patron of the Missions’. [10]