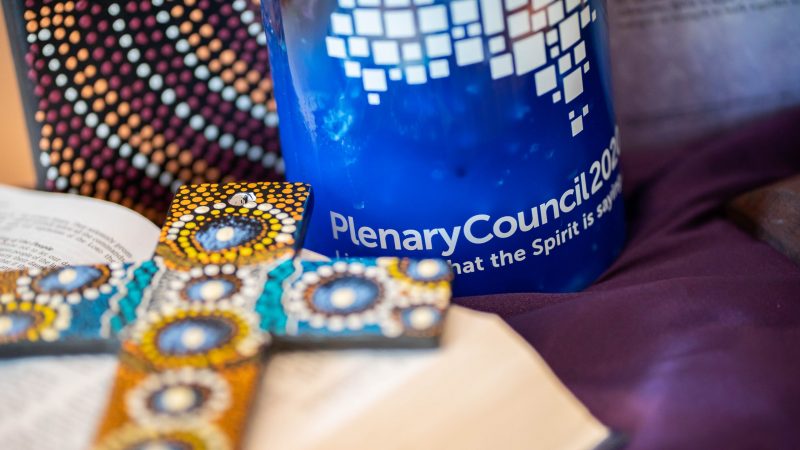 Thank you for your prayerful support during the first assembly for the Plenary Council here in Australia. The members of the assembly felt the power of prayer embracing them during these days. It was indeed a spirit-filled time. As you can imagine there was a rich diversity among the members but somehow through it all, the Spirit enabled us to hold the paradoxes together.

There was a sense of deep listening – gathering as missionary disciples, with each person’s voice adding to the rich tapestry of the Catholic Church as we prayed and shared together. There were divergent views with pieces of wisdom to be distilled as we worked in small groups or in the larger plenary sessions in a respectful manner.

The Sisters of Saint Joseph were present in three ways at this assembly.

Sr Therese Carroll was one of the 10 facilitators of the small group process. Archbishop Mark Coleridge was a participant in this group and he referred to an analogy of Therese’s in his homily for the concluding Eucharist of the assembly:

“The facilitator of my small group at the assembly had been a midwife for many years, and at one point she likened what we were doing through the week to bringing a child to birth. The process is slow, painful and messy, but in the end it is wonderfully fruitful and joyful as the baby is born.”

I was the chairperson for the special Plenary session on the Thursday of the assembly. I was also in a small group which was asked to discern the response to the two questions around conversion and the call to integral ecology.

Some of the treasures that I hold from the experience include:

You might like to listen to the Plenary Podcast in which I participated with Ms Selina Hasham on the final day of the assembly. You can listen to this podcast here.

The work is not yet finished. In the next nine months there will be further discernment and development of proposals and motions to be discerned at the second assembly in July 2022.

Many people joined in events related to the Plenary assembly through the livestream prayer and small group reports each day of the assembly. Others have joined in conversation through:

These sessions are still available if you want to reflect more.

In one of the interventions, the presenter referred to the story of the Good Samaritan – the story that shaped the sisters’ journey to the 27th General Chapter. He reflected the insight of Martin Luther King on this parable: The priest and the Levite both asked, “If I get involved what will happen to me?” The Samaritan asked, “If I don’t stop, if I don’t get involved, what will happen to the person who has been beaten and robbed and left for dead on the side of the road?” Perhaps this is true of so many situations in which we find ourselves engaged.

Let us keep the needs of the Australian Church and the Universal Church in our prayers as it begins the journey of Synodality.