On Sunday 1 December 2019, 58 years after it was first raised, the Morning Star Flag was raised again at Mary MacKillop Centre, South Perth.

The event was hosted by Alpheus Meage, with a small number of West Papuan friends and supporters, including Sisters of Saint Joseph, who are strong supporters of the West Papuan cause. In his address, Alpheus thanked the Sisters for giving him a home, and supporting him through the first years that he spent in Australia, as an asylum seeker. He said that the Sisters of Saint Joseph saved his life.

The raising of the Morning Star Flag is an event that happens in other places in Australia and in many other countries on this day.

The West Papuan people look back to the first raising of the Morning Star Flag, as a day of recognition of them as a people, the beginning of their long road to freedom. That day was a day of hope, the beginning of a dream for their homeland, of determining the kind of leadership that would govern their country. 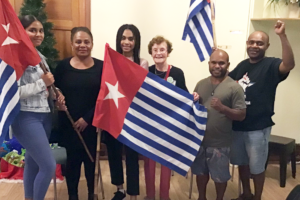 But the people of West Papua have seen their dream brutally shattered, many times over in the last 58 years. Benny Wenda, the Chairman of the United Liberation Movement for West Papua (ULMWP), escaped from gaol in Indonesia, where he was beaten and tortured. He now works tirelessly, with support groups, to influence governments and individuals, to support the rightful ambition of the West Papuan people to determine their own future. Benny tries to encourage his people to stay strong:

We have been crying for the last 58 years, he wrote, but today the world is finding out. One day, there will be no more crying, no more tears. As our national motto proclaims, we are One People, One Soul.Benny Wenda – Free West Papua Campaign, 1.12.2019

Let us join with the people of West Papua in their prayer and longing for freedom. God, hear the cry of the poor.