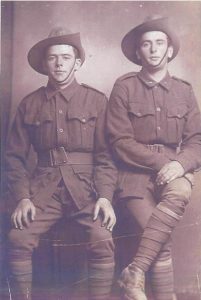 Herbert Clarence Ronan, Service number 265, and Maurice James Ronan, Service Number 421, were my paternal grandmother’s two older brothers.  Both were members of the 44th Battalion that was raised in Claremont, Western Australia in February 1916. It was part of the 11th Brigade of the 3rd Australian Division and was known as ‘Old Bill’s Thousand’ after its first commanding Officer, William Mansbridge.

The Ronan brothers left for Britain in June of that same year, headed for Britain and eventually, in March 1917 for the front line in France.  History recalls this battle as ‘one ill-fated effort involving almost half the Battalion on 13 March 1917’. Elsewhere it is recorded that by October 1917‘ of the 992 men from the battalion only 158 had emerged unwounded’.  By the end of the war only 80 men from the 44th Battalion had survived.

Among the 844 men who did not survive were my Great Uncles ‘Bert and Maurice. Maurice at the age of 20 years passed away on 14 March 1917, one day into battle, and ‘Bert did so on 4 April 1917 in the same battle. My grandmother had lost her two brothers within 21 days!!

While studying in Belgium I was able to visit some of the many Cemeteries where our Australian Soldiers now rest – Ypres and the Menon Gate that has the names of over 15,000 fallen, and Flanders Field.  The War Graves in each place were beautifully kept and at the entries to the grave yards there are plans of their layouts and lists of all those buried there.

During term break I made a pilgrimage to France to visit where my Great Uncles had fought and try to find their graves.  My first stop was in the small town of Boulogne where I knew Uncle Bert was buried.  It was a cold windy autumn day with the streets were ankle deep in autumn colours. Not speaking French was a difficulty but from visiting war graves in Belgium I knew the best thing to do was to find the Information Bureau and show them my Australian Passport and that they would then welcome me and know that I was there to find a loved one.  With map in hand (all in French!) I set out on a short winding road to the Boulogne Eastern Cemetery intending to stand at the foot of my Uncle’s grave – the first relative to visit for 83 years. 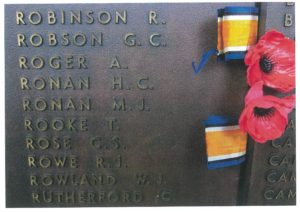 As I stood there, I thought of my great grandparents, my grandmother and her two sisters and younger brother, my father and his brother who never met their uncle and the two generations that have followed them.

Leaving Boulogne which is on the coast bordering the English Channel I headed back towards Lille and on to Armentieres, the closest station to the Cite Bonjean mil Cemetery.  Repeating the procedure that I had followed in Boulogne I set out map in hand – still all in French – for a small hike to the cemetery and easily located Uncle Maurice’s grave, thanks to the reverence with which the locals care for the fallen. How I wished that my Grandmother was still alive to know that ‘the boys’ had been visited!