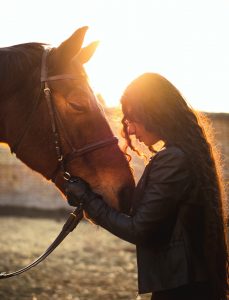 Four daughters of Goodness and Love sped through the night. Faith held the reins, guiding the horses with sure grip. Constancy and Patience were in the lead, ever responsive to her firm touch.

The coach gathered speed, for there was not a moment to lose. Faith and Peace glanced at their two other sisters with concern. Justice and Truth were ill, their faces strained and weary, their luminous skin seeming oddly flawed.  Were those marks bruises? Had the latest battles been so intense? Murder, greed, theft, rape, torture, abuse of children, cruelty to asylum seekers, political manipulation of law, secrecy concealing government crimes, the cries of ravaged earth––these and so many other wounds weighed them down like anchors.

Justice whispered to her sisters that she feared for Truth. Identical twins, it was as though one could not live without the other. Peace sighed deeply, knowing how much she depended on them both. Faith urged the horses on. Courage turned his head slightly, just for a second, and Faith was sure she saw him wink. Kindness snorted and whinnied with big teeth, and the other horses were spurred on at the thought of his great heart and future carrots.

Truth and Justice were sitting listlessly, their arms intertwined. Faith was unnerved at Truth’s pale face and shaking hands. Peace whispered, “All will be well if we get to the Convention on time.”

Guests were already beginning to fill the room as the coach drew up. The horses champed as night descended and the four sisters were silhouetted in the doorway of the great hotel.

Pretence could clearly be seen, blathering on, oblivious that her tawdry clothes were so transparent. Deceit was far more suave, gliding between groups, generous with her poison. Falsehood had made her way in through a window, claiming otherwise in wounded tones when accosted. She was dressed in brass, as always. Various heads of state, dignitaries, media moguls and billionaires performed their smiling theatre, always calculating the next move, the next encounter. Everyone quietly wondered where Hate was, until a smell began to exude from the back of the large room.

The general hubbub lessened at the sight of Crisis and Fear descending the ornate staircase, arm in arm. At the same moment, the four travellers stepped across the threshold. The silence was pierced by Truth’s wavering but limpid voice.

“Where have you hidden her?” she demanded to know.

Pretence darted a look at Conspiracy and swallowed hard. Power’s ostentatious outfit began to evaporate around her. Profit started to rummage through her purse for the airline ticket she’d carried “just in case.” Fear appeared transfixed, so caught up in herself that she failed to notice Crisis slinking away through a side door, with Deceit closely following.

A voice at the far end of the room rang out: “Here she is!” And into that fine assembly stepped Fact. Conspiracy was visibly shaken, desperate to weave a tale which might distract everyone.

Fact had been locked away under the guardianship of Denial, a simple woman dressed in black, shuffling in worn slippers, far too controlled by phone calls from her Aunt Despair. No matter what Fact said, Denial always had the last word.

But on the day of the Convention while the caterer was unpacking, Hope had filtered in with the sunlight and gave Denial a good talking-to. “Look what you’ve got yourself into again,” she scolded. “How many centuries must pass before you listen to me?”

Hope drew Fact out of the corner, untying the ropes around her wrists and removing the tape from her mouth, and Denial muttered, “It wasn’t my fault.”

As Fact ascended the stairs and stepped resolutely into the Convention Hall, Truth lit up. Justice breathed huge sighs, and later it was said with wonder that her shoulders actually increased in size. She even grew taller, said some.

After a night of intense conversations, Dawn finally broke, and the chortling horses shared carrots. As the four sisters settled into the coach they repeated the stories they had heard. Why was Fact so often hidden in favour of unsubstantiated, often anonymous opinions? Even though she could be difficult to find sometimes, Effort was always willing to help.

They sped off home, relishing the thought of some rest, but wondering where they would be called to next. A boardroom? A newspaper? A church or school? A government?