We remember Deacon Boniface (1936 – 2019), a man who lived the spirit of this year’s NAIDOC theme: ‘Voice. Treaty. Truth. Let’s walk together for a shared future.’ 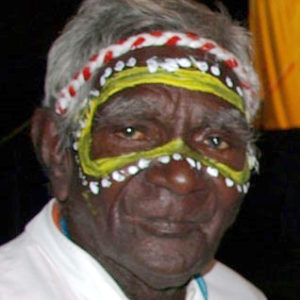 Deacon Boniface Perjert was born in Port Keats, Northern Territory in 1936 to Perdjert his Muripatha father and Bullimbi, his Moigabin mother. Boniface was the first baby baptised at the mission run by the Missionary of the Sacred Heart (MSC).

He blazed a trail for Aboriginal and Torres Strait Islander Catholics to follow as he not only walked between two worlds – Catholic and Traditional – he brought them together. His words and actions spoke loudly to the members of the Wadeye Community – of which he was a deeply loved and respected Elder – but also to the Catholic hierarchy with whom he shared his wisdom on many official occasions.

He was ordained the first permanent Deacon in Australia at Port Keats on 19 July 1974 by Bishop John O’Loughlin, the Bishop of Darwin and in November 1986, Boniface assisted at the Mass celebrated by now Saint John Paul II in Alice Springs when he delivered the famous address to the Aboriginal and Torres Strait Islander people. He again assisted Saint John Paul II at the beatification Mass for Mary MacKillop in Sydney in January 1995.

A quote from Deacon Boniface:

When I read the gospels, I read them as an Aboriginal… so many of the things Christ said and did and the way He lived, make me think of the good things of our way of life. Christ did not get worried about material things… He looked on them as things that get in the way and make it hard to get to our true country. He was born in the countryside in a cave, like many of us have been born. He walked about like us and with nowhere to lay His head. He died with nothing on a cross. So many of our people die with nothing. … He was strong on sharing. We do a lot of things like that. Of course He went a bit further. In the Eucharist He shared Himself as nobody else could. Boniface-Peridjert in Hendriks & Heffernan 1993 “Spirituality of Catholic Aborigines and the Struggle for Justice”

Reflect more on the life of Vale Deacon Boniface with a tribute by the NATSICC (National Aboriginal and Torres Strait Islander Catholic Council) below:

A Tribute to Deacon Boniface