In May 1881 ‘Cheshunt’, 3 Cumberland Street, The Rocks became the fourth House of Providence of the Sisters of Saint Joseph of the Sacred Heart.

The establishment of ‘Cheshunt’ marked a significant growth point in the work of the Sisters. (Click to view article on the First Three Houses of Providence at The Rocks here). 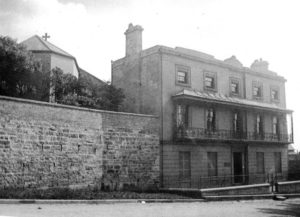 This was the first House of Providence that was not rented. It was a large three storey building, with a basement, that had access from both Lower Fort Street and Cumberland Street. It was ideally located next to St Michael’s Church. When considering where to move after Craig Terrace, the second House of Providence became too small, Sister Josephine Carolan had recognised that ‘Cheshunt’ would meet all the needs of the rapidly expanding ministry. It was not for rent and she knew she didn’t have the funds for purchasing property so ‘Winsbury’ at 74 Kent Street was rented as the third House of Providence.

This notion of buying real estate was a relatively new concept for the Congregation and was a point of difference between Father Julian Tenison Woods’ ideal of radical poverty and that of the new Rule that Pope Pius IX had approved in April 1874 during Mary’s visit to Rome.

Sr Josephine Carolan was the Sister who made the headlines in Brisbane in November, 1879 by going public in the press, refuting Bishop James Quinn’s unjust claims against her Superior General. She approached the Bank of Queensland now for the colossal sum required (£6750); the bank, recognising the name as security enough, met the loan, and the agents accepted the lower deposit of £1000.  Kathleen Burford rsj, Unfurrowed Fields, 37

In 1879 Mary MacKillop did correct Sister Josephine and asked her to write a letter of apology to the Bishop. However, in her letter to the Bishop, Mary made the comment that he would have to agree that Sister Josephine was provoked by what was stated and printed in the Diocesan paper. Sister Josephine, while in Brisbane had dealt with the Bank of Queensland. God’s provident care had him in Sydney, two years later, at the very bank Josephine approached with a request for the loan.

Perhaps this story highlights the need to speak truth for justice sake and that silence can be a vehicle for unfair treatment continuing and so blocking the Will of God for the greater good. Sr Josephine Carolan certainly was a hero in her own integrity and the purchase of ‘Cheshunt’ opened many doors for kindness, fairness, compassion for all those who needed its sanctuary and also for future funds put to good use! 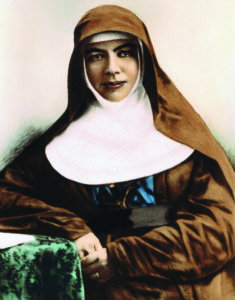 It was a temporary Novitiate from 1881. Mary MacKillop was resident here from December 1882 until June 1883 and again in November 1883 when she was expelled from Adelaide. In early 1884 she took up residence in Alma Cottage North Sydney and on St Joseph’s Day 19 March the Novitiate moved to there.

When the bubonic plague ravished The Rocks in 1900 the government cleared the area of all residences. The Sisters arranged for the residents of ‘Cheshunt’ to be housed elsewhere and finally they too left on 19 March 1901. Because the property was owned by the Sisters compensation was paid by the Government, clearing the mortgage and allowing for funds to be used for the Lane Cove Orphanage for Girls. God’s provident care once again helping the poor.

‘Cheshunt’ was demolished as part of the construction of the Sydney Harbour Bridge. The approximate location can still be seen under the approach to the bridge, next to the hotel on the corner of Lower Fort Street and Cumberland Street.

For more information please consider doing A Pilgrimage Through The Rocks. The booklet for this self-guided Pilgrimage is available from the Mary MacKillop Museum shop.