No Two Days the Same.

I love being part of the Josephite Justice Network (JJN) and the young Josephite Action Group (JAG). This love was nurtured from childhood.  My father particularly embodied for me what it meant to fight for those pushed to the edges. As well, my Josephite education taught me to see needs and do something about them, and my Josephite life has given me opportunities that otherwise I might never have had.

It is a truism to say that no two days are the same in justice work.  JJN has been most closely involved in recent months in the climate crisis, the Uluru Statement from the Heart, asylum seekers and refugee issues, affordable housing and the accelerating gap between rich and poor.  The great joy of being part of the Network is the fact that all of us have passion for justice across all these areas, but that different members focus on particular issues and call on the rest of us when necessary to join with them on a particular concern.

In our morning prayer today, the psalmist assured us that “the God of truth and justice fills the earth with love”.   A great reminder!   At our last JJN meeting we shared our belief about the importance both of speaking the truth – in love – and giving hope. It is this that motivates and reassures me as we take action in the many ways, we have done this year.

We struggle as you’d know, realising that in the current political climate, it’s almost impossible to make gains. Meetings, phone calls, letters and visits to politicians, submissions to Government, achieve little more than polite or not so polite rejoinders (mind you, the politician who wrote, ’you stick to your business of saving souls and let us focus on saving the country!” did amaze me).

I was asked last week by one of the young people with whom we work why we persist when so little progress seems to happen. 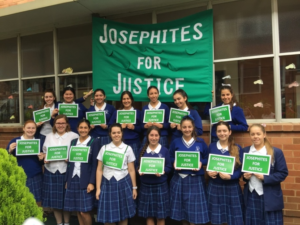 And of course, it’s because I’m continually inspired and challenged by the people with whom I serve each day, including the young woman who asked me this question.  It’s also because I can do no other.  Belonging the group founded by that woman whose motto was “never see a need …” and continually inspired by those who journey in her footsteps, it’s impossible to do otherwise.  Ultimately, I believe strongly in the force for good that the Josephite life can be, and I’ve been enormously blessed in the opportunities I’ve been given to share in it.