During 2019, the Prayer and Spirituality Program at St Joseph’s By the Sea, Williamstown, focussed on the Plenary Council question “What is God asking of us in Australia at this time?”

In October, the topic was: “How can we joyfully receive the contributions of our indigenous sisters and brothers?” The presenter was Sherry Balcombe from the Aboriginal Catholic Ministry Victoria. The following is the response of a participant in the program, Sue-Ann Hess:

The Church herself in Australia will not be the church Jesus wants her to be until you have made your contribution to her life and until that contribution has been joyfully received by others. Pope John Paul II, 1986

This quote, made by Pope John Paul II at Uluru in 1986, was the focus of our conversation with the current Coordinator of Aboriginal Catholic Ministry Victoria, Sherry Balcombe, this past Thursday.

Hosted by the Josephite Sisters at the beautiful St Joseph’s by the Sea in Williamstown, the day offered two opportunities to sit with Sherry, to listen to her sharing her experiences, and to ask questions about aboriginal spirituality and in particular, what it means to be aboriginal Catholics.

For those us who don’t come from an aboriginal heritage, it was important to understand that within aboriginal culture, there is no separation between spirituality, culture, and identity. Spirituality is something that resides within each person; it is a connection to creation, to kinship and family, and to the Creator Spirit. It has been at the heart of aboriginal communities for thousands of years even through the most painful experiences of injustice. As Sherry explained, there is a great gift, and a great calling that has been given to the aboriginal people, to be a part of the oldest living culture on earth, and to share the beauty of that culture with other peoples.

As we reflected on the full speech given by the pope more than 30 years ago. It was clear that he was encouraging aboriginal people to express their catholic faith in culturally specific and unique ways. He says:

You do not have to be people divided into two parts, as though an Aboriginal had to borrow the faith and life of Christianity, like a hat or a pair of shoes, from someone else who owns them. Jesus calls you to accept his words and his values into your own culture. Pope John Paul II, 1986 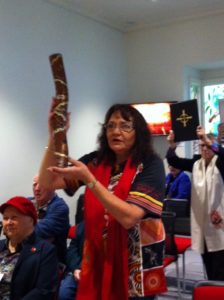 Sherry took the time to explain to us how aboriginal signs and symbols can be incorporated into catholic sacraments, such as baptisms or the mass. Elements of aboriginal culture, such as message sticks, coolamons, emu oil, possum-skin cloaks, and clapping sticks can be powerful ways to express the meaning of the sacrament. We also saw examples of beautiful prayers written by aboriginal authors.

Do not think that your gifts are worth so little that you should no longer bother to maintain them. Share them with each other and teach them to your children. Your songs, your stories, your paintings, your dances, your languages, must never be lost. Pope John Paul II, 1986

Despite our shared agreement that our aboriginal brothers and sisters have suffered greatly at the hands of the settler peoples, our conversation had a hopeful tone, as we shared anecdotes about the reinvigoration of aboriginal culture in today’s young people. Using examples like the Tanderrum event at Federation Square recently, and the work of the Opening the Doors Foundation in our Catholic schools, we could see ways in which aboriginal culture is being re-nurtured and strengthened once more. Through Sherry’s sharing and teaching, we were encouraged to reflect on our part in joyfully receiving the contribution of the aboriginal culture.