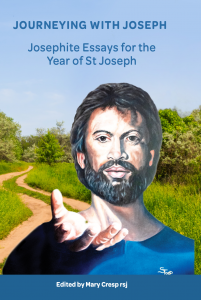 The title of the book, Journeying with Joseph, offers a broad canvas on which the authors explore and honor Joseph, whom Christians know as the foster father of Jesus.

The idea of the work evolved from the creative mind of its editor, Mary Cresp rsj, and from Josephite history impregnated as it is with the ideas of founders such as Mary MacKillop, Julian Tenison Woods and others. The writers themselves offer us their expertise in areas such as spirituality and theology as they write about a silent man who provided a sacred space for both Mary and Jesus.

The book is subdivided into three sections: Joseph’s Foundational Inspiration, Joseph’s Radiant Influence and Joseph’s Cultural Outreach. The sections make it easier to access areas of particular interest to the readers.

Many of the authors make reference to the fact that Joseph has only recently been included in Eucharistic liturgy. He was not included in the Canon of the Mass, for instance, until 18 December 1962. While this is so, Joseph has been an integral part of the devotional and festive side of cultures such as the Vietnamese, the East Timorese and Peruvian cultures as explained by writers from these cultures.

Perhaps the official Church has taken a while to catch up with the people whose life story resonates with Joseph’s story. One of the strengths of this book is that it allows the voice of so many diverse cultures to be heard in a powerful way. It reiterates the devotional and festive attitudes towards Joseph integral to so many cultures.

The diverse authors are not made to see Joseph through a particular lens. Each has their own perspective to offer, and contributes to the understanding of Joseph as father, saint, human being.

Michelle A Connolly’s opening chapter, “Matthew’s Joseph, a Man of God for Jesus”, offers a powerful theological foundation for the book. Michelle’s scholarship is evident and she sets the tone for the strong research component underlying the contributions to the book. There is also present in her chapter, as in other sections, a deep sense of personal spirituality and love of Joseph. Pope Francis obviously touched a nerve when he declared this year the “Year of Joseph” and wrote Patris Corde.

Virginia Burke has a powerfully written chapter inviting us to see where so much of the Josephites’ lore beyond scripture has been sourced. She notes that:

The ancient apocryphal writings … witness to a simple honoring of Joseph from early Christian times. The most influential of these is the Protoevangelium of James … it is the source of many legendary narratives about Jesus within the Holy Family and characterizations of Joseph (p. 17)

Jo Brady (p. 95-6) referring to Elizabeth Johnson notes that the purpose of Matthew’s story is one of faith but that the story also reflects the historical accuracy of the times. It is through Joseph we understand the need to protect, escape and survive in an oppressive world.

Sue and Leo Kane draw on the creative side of research as well as offering a balanced intellectual approach. They reflect on the art portraying Joseph and the holy family through the ages. They write that the apparently insignificant can be fraught with meaning. Studying the art is itself insight and revelation.

While the traditional understandings around Joseph are strong, other writers link Joseph to the great transitional contemporary and global movements of which the readers are a part. These movements include: ecology, the women’s movement, Aboriginal culture, the Maori story, and the suffering of refugees, as well as the faith development of the ordinary man and woman.

Perhaps one of the greatest challenges within the book comes from Michelle Fairbairn’s article. Story is the metaphor underpinning this chapter. She writes:

Stripped back to its bare bones, we are custodians of stories that at their heart, are about revolutionary acts, about figures subverting a dominant culture that no longer serves (p. 154)

This is a Joseph for our time indeed.

In this book, Journeying with Joseph, we traverse two thousand years of the evolving story and understanding of Joseph. The authors are all those who have a deep connection with Josephite institutes throughout the world.

This Josephite work begun in Le Puy by Jean-Pierre Medaille SJ, was brought to life by six women in that area. In the “New World” the faith, prayer and work of the original group have fired Josephite institutes globally. This is especially true of all Josephite institutes connected to Mary MacKillop and Julian Tenison Woods.

To quote from Jeanette Winterson, as found in Michelle Fairbairn’s chapter:

It’s only a story you say. So it is . . .but the story is not told. I have to tell it to myself. What is it that I have to tell myself again and again? That there is always a new beginning, a different end. I can change the story. I am the story. Begin (p.159)

The whole of this book invites us to understand, to love Joseph and to keep on rewriting the story.

Thus this book is well worth reading. It is an initiative of those who took, and take, the original Josephite charism seriously. The book can be seen as a many-faceted lens by which this saint, in the shadows, can be brought more clearly into the light. His story, and ours, are linked and both continue to evolve.

Cresp, Mary (Ed). Journeying with Joseph. (2021).  ATF Publications: Brampton, SA. (240 pages plus including index) The Lochinvar and “Central” Sisters of St Joseph are the co-sponsors of this work.