A reflection on the Feast of the Epiphany (3 January).

The moment of the big bang, or more poetically, great flaring forth, is for scientists a moment to explore, rationalise and quantify. For those who believe in a God it is a moment of epiphany, a theophany and the moment when God released life and love into the universe.

Since that moment there have been many epiphanies, many manifestations of the power of the sacred in space and time on a universal, global, and personal level. Some epiphanies we have recognised, some we have failed to know. We are finally coming to know, however, that all of creation is an epiphany of the goodness of God.

Since Christianity came into being as a religion it has chosen certain moments of epiphany to ritualise and celebrate. Easter, Christmas and Pentecost are always new, always revealing an ongoing love derived from that first outpouring. 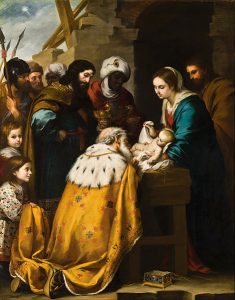 In a 361AD document mention is made of an actual feast of the Epiphany. At that time Christians began celebrating a moment of waiting, of longing for the dawn, for the new, for the coming of a great personage promised by the prophets of Israel. They ritualised a longing that was fulfilled, yet one for which they, paradoxically, still hoped.

The Incarnation was the pivotal point in sacred history. It was the mystery first revealed by the Magi, revealed again in the wild waters of the Jordan at the Baptism of Jesus by John the Baptist and in the great manifestation of the Trinity accompanying that Baptism: this is my beloved son! The Incarnation was revealed again by Jesus himself in the first sign at Cana. At Cana water becomes wine and by doing so manifests the power of spirit to enter matter and change its essence.

The Epiphany invites us to listen again to the Baptist as he prepared the way for the manifestation of the Messiah, of the Jesus who was to become the Christ. He called Israel to repent as the prophets had been doing over the centuries of Jewish exile. His cry was not to self-punishment but a call to rethink the Jewish understanding of Messiahship. The Incarnate One was not a military, conquering hero. He was not one to embrace war but he was a person of peace, vulnerable, poor, loving, one intimate with the Divine. Jesus is the one who, today invites us to rethink our understanding of God and of our humanity. With the Magi we offer all we have to God and to each other. As Christ changed water into wine we are to be cocreators with God changing our world, enriching it.

The feast of the Epiphany, like all great feasts belongs to all cultures and religions. It is celebrated in many different ways in every form of Christianity. For some Christians it has its own season culminating on Candlemas Day. It is, in fact a celebration of light.

A people in darkness have seen a great light!Isaiah 60:1